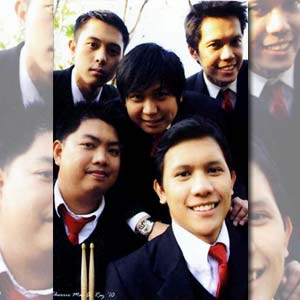 It was December last year when Jay Jay Lozano and his brother Pepe resigned from the Bloomfields to form a new band they agreed to call The Bloom Brothers.


Even when two persons bolted from the group, The Bloomfields is still performing in gigs with its remaining members Louie Poco, Lakan Hila and Rocky Collado.

Jay Jay's role in the Bloomfields was undeniable. Though reluctant to harp about his contributions, the singer-songwriter was considered as the band's creative force, sorting through materials fit enough to boost live gigs aside from writing and arranging original tunes to complement cover songs.

The Bloomfields has released two albums under EMI Philippines (now, PolyEast Records) and was responsible for the radio hits like "Ale" and "Wala Nang Iba."

The partnership, however, ended due to "creative differences" among the members. Jay Jay, in particular, felt that the rest of his bandmates were yearning to take a different direction as dictated by their varying influences.

While the Bloomfields was always known as a retro band Jay Jay wanted the group to further dig out gems belonging to an older era. Unfortunately, the rest of the group preferred staying on familiar territory while occasionally flirting with rock n' roll tunes.

"Actually ang gusto ko talagang direction was for us to sing songs that would feature our vocal harmonies, our vocal blending. I'm really fascinated by standards, those numbers from the 40s and 50s, I really love those songs," Jay Jay told members of the entertainment press over lunch last February 12 at the La Mesa Grill in TriNoma Mall, Quezon City.

BLENDING HARMONIES. The strain in the band's relationship, according to Jay Jay, curtailed his creativity. It even reached a point where all the members could not bring themselves to agree on anything. Camaraderie among the old friends suffered as a result and live gigs started to feel more like a drag than fun.

Using the name Bloomfields was not entirely possible since the band is still an intact entity. What Jay Jay did was retain the word "bloom" and add "brothers" in naming his new rock n' roll project.

With a new band and fresh outlook, the ex-Bloomfield member is determined to follow his musical and creative vision. He even compared his situation to that of Brian Wilson of The Beach Boys, saying that he is challenged to surpass the accomplishments made by his former band.

Part of the plan is to write more original materials coated with sweet harmonies and vocal arrangements. Jay Jay can now fully embrace the title arranger, composer and songwriter.

The Bloom Brothers are currently in the process of sharpening their chosen materials as well as scouting venues for them to play and exhibit their style of music.

"It's quite nostalgic actually because it reminds us of how we were before when we were just starting," Jay Jay said in hindsight, recounting the old times shared with old friends in living out their rock n' roll fantasies.

But change is good and Jay Jay quickly brushed off nostalgia while talking about The Bloom Brothers: "Now we can sing harmonies more perfectly and sweetly, technically speaking, our voices would blend well together since we all have similar voice and tone qualities. Now that's something special I consider."