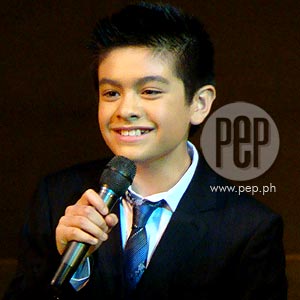 When Brit-Fil Charlie Green signed a one-year contract with Viva Entertainment, he was scheduled to have a month-long visit to the country to give him time to record his second album. His self-titled debut album was previously released by Star Records.

In this 13-track album, Charlie said that he would still be the usual "swing singer."

The former Britain's Got Talent contestant said, "Probably, the main songs would be swing, there would be different types of songs. Probably, the next CD after that would be more originals and pop as well. As of the moment, I would just keep going on [with] what I'm feeling and what I'm well known at the moment."

His dad, Roger Green, pointed out, "We revived a few songs but done in Charlie's style, more on the swing. Some maybe won't recognize [the songs] because it's from yesteryears but we're gonna update them and bring them into the modern era.

"A lot of people really contributed in the lineup of songs because, obviously, at Charlie's age, he might get lyrics that are too old for his age. I think, we got a nice line up of songs."

SINGING OPM. Aside from performing classic songs, Charlie also revealed that he will be recording two original Pinoy songs. These are "Perslab," a song originally performed by the '70s Pinoy band Hotdog; and "Ewan," which was popularized by the famous trio, the APO Hiking Society.

Although the young singer could not clearly pronounce Tagalog yet, he was still confident that he will be able to record these songs in the vernacular.

WORLDWIDE DISTRIBUTION. Aside from offering his music to Pinoy fans, Viva also plans to distribute the upcoming music album of Charlie in different countries.

"We're hoping for the world wide distribution. So, it'll be great to get the album distributed in the U.K., United States, and Italy," said Daddy Roger.

Viva Records will also be collaborating with internationally renowned record producer-songwriter Christian de Walden. He is an Italian songwriter and arranger who has produced hits for foreign music artists as well as our very own Sarah Geronimo.

As part of its international release, Christian said that they are planning to introduce the album at the annual music industry trade fair in Cannes, France, called Marché International du Disque et de l'Edition Musicale (MIDEM).

"I have one of my partners in Europe who made good [music] reviews. I said, 'We're recording an album. We're preparing this and this and that...' There's a lot of interest and I think we would be ready for tour," he said.

After recording for his album, which will probably end this month, Charlie will then go back to England. "Then, I'll be back in April or May to [perform] a new set of songs for [the promotion of] my new album," Charlie ended.