'A Day on the Rainbow' with Gerald Santos 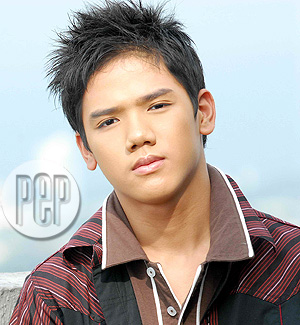 Gerald Santos's debut album shows all the reasons why he deserves the PPS plum
Glancing at the monochromatic cover of his interestingly-named debut album A Day on the Rainbow, one gets the sense that Gerald Santos’ startling victory in Pinoy Pop Superstar (PPS) Season Two hasn’t taken over his head. Instead, his intent gaze towards the ground is a seeming display of gratefulness. Add that to the aesthetic flair of his much-anticipated release and you’ve got a successful combination.

At the tender age of 17, Gerald already has a solid fanbase. The moment he first stepped as a competitor in PPS to boot out first grand contender and fellow finalist Harry Santos, the signs all pointed in the right direction: his preordained journey has now begun, riding on the wave of his classic, old-school taste.

Speaking of his classic taste, it is fairly evident in almost all of his performances. Gerald is a gifted singer with a knack for belting out beautiful ballads. Not to mention his polished maturity derives from extraordinary singers-songwriters Jose Mari Chan and Ogie Alacasid.

With his album A Day on the Rainbow, Gerald demonstrates all the reasons, and then some, why he deserved winning the PPS plum. Title track and first single “A Day on the Rainbow” penned by Rebel Magdagasang talks of a personal longing for someone so dear. Gerald’s soft vocals let the song flourish in pleasant fashion. There are no overpowering sky-high notes that have become the staple of today’s up-and-coming singers. Instead, Gerald settles for a toned down approach, fragile at first before it amps up and punches into the air, one that subtly evokes images of Jose Mari Chan.

Using his remarkably adaptable voice, Gerald sings emotively about the cycles of love in “I Believe.” This time though he belts out with all reckoning “Cause I believe you and me were meant to be together. I believe in our dreams that this has meant forever.” Leaping into familiar grounds is “Di Sinasadya,” “Ikaw,” and “Mahal Kita,” soulful tracks based on simple piano arrangement. Again that distinct hint of traditional splendor shines in these songs, which is actually accessible from pop-loving 18-year-olds to classic 50-year-old listeners.

Lastly on “Kahit Isang Saglit,” Gerald’s appeal is haunting and absorbing. The sparse acoustic set magnifies the classic song’s desperation and Gerald captured the essence of the ballad. Everything about it is full-scale yet the stripped down backing say otherwise; this proves that the selling point is sheer vocal talent. Here is one song that left a mark on PSS viewers and fans.

This debut album is vastly focused on the pureness and simplicity of Gerald’s singing ability. He sounds raw and fresh here and not submerged under the weight of too much musical arrangement. Perhaps this is just a sign of bigger things to come. But for now let Gerald indulge us with his charms and talents.
Continue reading below ↓
Recommended Videos
Read Next
Read More Stories About
Gerald Santos
Post a Comment
Latest Stories
Trending in Summit Media Network
Sorry, no results found for
© 2019 Philippine Entertainment Portal Inc. All Rights Reserved