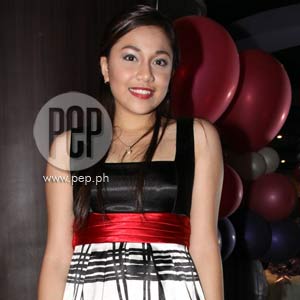 She almost made it to the Top 12 finalists of the Pinoy Idol in 2008. Unfortunately, then 17 year-old Carol Leus was eliminated, along with fellow aspirant JJ Jr., just before the announcement was made. (CLICK HERE to read related article)

The former Pinoy Idol contestant admitted that this incident somehow affected her life. But, she had to move on and find other avenues to fulfill her dream of becoming a well-known singer. She then decided to come up with her own music album.

Aside from Pinoy Idol, Carol previously joined other singing contests in Dubai, United Arab Emirates, where she spent her high school days with her parents. Among these were Starquest 2003, where she placed second; and TFC Popstar Dubai 2004, where she was included among the 60 contestants.

CREATING HER DEBUT ALBUM. After joining Pinoy Idol, Carol went back to De La Salle-College of Saint Benilde, where she's currently taking up AB Music Production. But even though she conitnued with her studies, she never lost her passion for music.

The 12-track album was made possible through the help of her father, Arman Leus, who was the executive producer of the album. They also sought the help of her uncle, album producer Boy Christopher, who provided most of the songs included in her all-original album.

While most newbie singers do cover songs, Carol took a risk by introducing new songs to Pinoy listeners.

Carol also believes that her educational background in music will give her an edge compared to other newcomers.

Carol Leus is released by Sunrays Music and will be distributed by Aquarius Records and Tapes. Its carrier single is titled "Timang."