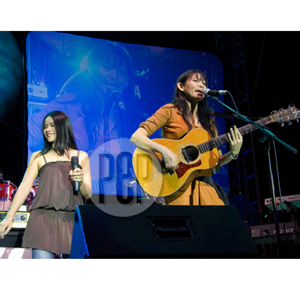 World music artist Bayang Barrios (left) performs for Earth Day Jam 2007 along with Cynthia Alexander, who is the sister of Joey Ayala.

FROM MIKE VILLEGAS: Music festivals are always a welcome addition to my gig calendar, as it offers a great opportunity to touch base with artist-friends I don't normally catch at club dates. Whether they're song-writing contests like the Metropop or the Himig Handog, awards ceremonies such as the NU107 Rock Awards, or awareness campaigns akin to the Stop The Killings tour, these festivals allow musicians to see their heroes up close (what's closer than backstage?!) and grab a few tips from other like-minded artists. They're fun, informative, and the food is free!

So when world music artist Bayang Barrios was invited to play at this year's Earth Day Jam (held last April 20th along the stretch of Tomas Morato Avenue in Quezon City), I was ecstatic! Not only was I playing a festival, I was playing a gig which had a theme I've held dear through all my years of writing and performing: our environment.

As a kid, (and am I ever thankful for this!), I grew up listening to my parents' records and cassettes. Incredible artists like The Beatles, Paul Simon, and The Police comprised the soundtrack of my childhood. But it wasn't until my teens, when I discovered the music of Joey Ayala, that I discovered a similar treasure, but offered up first to my own generation. Joey's albums were difficult to find—the allure of something hidden, and something precious, held sway in my search for his songs.

Folk singers who used to open for the bands I was in would sing his songs from memory, like the handed-down tales that were the oral tradition of the first songwriters. This mysterious Dabawenyo and his band, Ang Bagong Lumad,were singing about angry, denuded mountains ("Ania Na"); were playing instruments I had never heard before (like the now ubiquitous kubing in "Tutubing Bakal"), and had me thinking, I mean really thinking, about our war-torn, if ecologically rich South ("Wala Nang Tao Sa Sta Filomena"). This was a heady mix for a teenager spinning in his own compass, looking for a steady North he could call his own. I was hooked, and I still don't have a bigger hero to this day.

Forward now about 15 years, and to a few of PEP's younger readers it might almost seem routine, almost tired, to celebrate Earth Day, with her pageants, her concerts, and Al Gore's film An Inconvenient Truth. But it wasn't too long ago that the very idea of our entire world assessing the planet's well being—together—would have seemed improbable, if not downright fantastical.

Thanks to artists such as Cynthia Alexander, Pinikpikan, Bayang Barrios, and Noel Cabangon (all present last April 20th), the songs live on, and a love for Mother Earth is still being handed down.