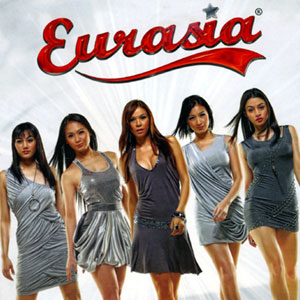 All-girl group Eurasia mixes the beats of East and West in its self-titled debut album. Remakes from '80s songs and fused into modern beat makes this album worth listening to.

An international ensemble of hot and talented women has landed in the Philippines to showcase not only their sultry looks but their melodic voices as well. Meet Eurasia, the aptly named girl band composed of Lana Roi, Sara Polverini, Kelly Gamboa, Kristine Nieto and Gail Nicolas. They recently released their 13-track album Eurasia under Viva Records.

Why Eurasia? Well, some of the girls have mixed lineage from Europe. Lana is part-German, Sara is part-Italian, and Kelly is half-British. On the Asian side, Kristine has a mix of Japanese ancestry and Gail is the only 100% Filipina.

You've already seen them in the afternoon show Party Pilipinas as well as on the cover of the 10th anniversary issue of FHM-Philippines (March 2010). They're no overnight act, being well-honed performers going live at the Resorts World Manila and appearing at corporate shows and guestings around Asia, including Taiwan, Malaysia, Singapore, and Hong Kong.

THE VERDICT. The first track of the album, "Working Girls," sounds like a slow trance with the purring of kittens. It's purely danceable and is quite easy to sing along with. Limited beats, however, make this track forgettable. The following songs after this have nearly the same beat, making it more like easy listening than danceable.

Before I could doze off, the 5th song, "Walk Like An Egyptian," woke me up with its unique mix of beats (traditional with modern bass). We also get to hear Gloc9's slick rhymes in this track. Hearing the girls rap along with Gloc9 would've made this the song to watch out for. "Floating" also came in smooth to the ear. You could almost remix this song with Chris Brown's "Forever."


My suggestion would be to use "Floating" as their starter track. It feels alive and positive from start to finish.

"Hinding-Hindi" experiments with a fiesta beat while retaining that sexy flavor. I could almost imagine other dancers working out a sweat with this song.

The 12th track, Mambobola, is a great rendition from the Zsa Zsa Padilla's hit '80s song. The 6-minute classic was transformed in a club beat that would likely be a favorite among discos around the metro by now. Zsa Zsa would be proud.

Overall, the album is pleasant to listen to with the band mixing different beats and experimenting with renditions. However, some of the tracks have a tendency to be repetitive, making the 13-track album sound like an 8-track "Extended Beat" special. Talented and experimental as they are, Eurasia would perk up more ears if they incorporated other genres in their album like Bossa Nova or Jazz perhaps. Why settle only at Hip Hop if they can go all the way?

I have high hopes for Eurasia. Their respective international backgrounds (exposure to different musical genres) can be an advantage over the other bands.