Join music icons Rock for Change on May 1 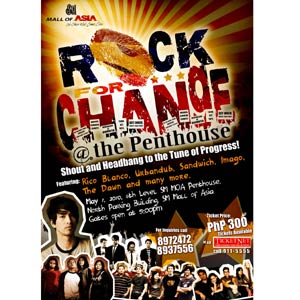 The public is invited to come to an eye-opening concert dubbed as Rock for Change at the Penthouse. It will take place on May 1, 2010 at the SM Mall of Asia Penthouse. CLICK HERE to join PEP's online promo.

Many changes shall take place in this year's elections. Aside from the automated way of tallying the votes, many young faces are coming up as they vie for various local and national public offices. But, this year, more than anything else, the youth has decided to take a strong stance, shout, and let the nation know the power of their votes.


This May 1, at the SM Mall of Asia Penthouse, the youth are invited to rock together with music icons, such as Rico Blanco, The Dawn, Sandwich, Imago, Urbandub, and other local talents.

Dubbed Rock for Change at the Penthouse, this rock concert aims to empower the youth and let them know the importance and power of their vote. For such a long time, the youth seems to have been an apathetic member of the society who could not care any less when it comes to politics. And this perception of the youth has remained the same for quite some time. People from Crush and Roam Philippines, however, felt the opposite way. That is why, together with World Wide Womb, they have mounted this rock concert to prove that the youth are just as informed and concerned when it comes to politics and the country's future for, as the our National Hero Jose Rizal puts it, they are the hope of our nation.

However, the youth of today do not want to be forced into listening to lectures and to be taught on anything that bores them. With the performers very much willing to cooperate and play their music for them, Rock for Change at the Penthouse is the perfect means of educating the young Filipinos about the power of their vote, influencing their mindset on politics, and effectively motivating them to vote this coming elections.

On May 1, Saturday, rock stars Rico Blanco, The Dawn, Sandwich, Imago, and Urbandub also decided to unite and motivate the youth with their music. On this monumental evening, the local icons work hand-in-hand to empower the youth and lead the change the country has been waiting for so long. Sharing the same belief that the youth is the progress the nation has been needing, the rock icons shall scream their hearts out, pouring out their emotions and awakening every young Filipino soul that hears them during that special night.

The Rock for Change at the Penthouse, aside from empowering the youth through the music of favorite rock bands, also aims at educating them with expert speakers that they would surely listen to. Also part of the event is an educational talk on voters' awareness and the new automated tallying system, preparing the young Filipinos for the upcoming national elections.


PEP PROMO. Six lucky PEPsters will win two tickets to the Rock for Change concert on May 1. Promo will run until April 27, 2010.