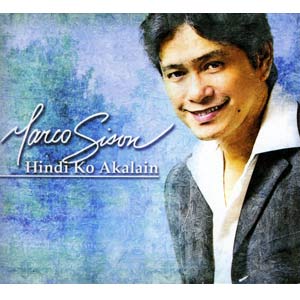 The singer was simply doing live performances both here in the country and abroad. Marco has been part of the touring group called The Greatest Hitmakers comprised of veteran OPM artists Rico Puno, Hajji Alejandro, and Rey Valera.

But Marco admitted that the thought of releasing a new record was not entirely off the radar. Doing a cover album, however, is not an appealing option for the amiable balladeer whose past hits include "My Love Will See You Through" and "Si Aida, Si Lorna O Si Fe."

Marco's interest in reviving his recording career became serious only after he heard the new materials penned by songwriters Bodjie Dasig and Odette Quesada.

Soon, Marco found himself inside the recording studio in America and cutting songs for a new album. The result is a 10-track album composed of eight fresh materials and two revivals: "Friend of Mine" and "'Till I Met You."

The songs in the album perfectly captures that distinct OPM feel as proven in the tracks "Hindi Ko Akalain," "Baby, Puwede Ba," "Right Beside You," "Try My Number," and the lead single "May Iba Na Ba?"

Marco is grateful to be given the chance to come up with a new album considering the number of younger singers out there today. But more than that, Marco appreciates the opportunity to record new and well-crafted materials.

"Sabi nga nila na kung ikaw ay bagong artist, the material will make the artist. But once you have the hits, it's the other way around. Kami nagkataon lang talagang naging classic 'yong kanta namin at siyempre very proud ako sa accomplishment na 'yon. But I also would like to have my second set of hit songs which I hope will be in this album kasi it's a good start and sana dire-diretso," he said optimistically.

Also, catch Marco perform on May 19 and 26 at Heritage Hotel's Pagcor Heritage Boutique along Roxas Boulevard. Marco will be at Subic on May 28 before joining The Greatest Hitmakers on May 29 in Davao City. The Hitmakers will then embark on a U.S. tour come September where they will visit Reno, Las Vegas, Miami, Washington, and New Jersey.