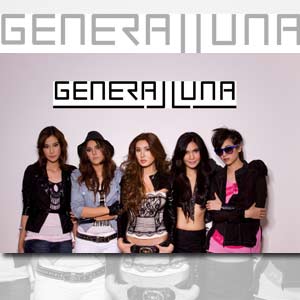 The all-female band General Luna was hailed as NU107's first "Rock Recruits" for the month of April. The quintet will soon release their debut album under Warner Music Philippines.

The Saguijo Bar in Makati City was already jampacked with its usual patrons last Thursday, June 10, even as the second set of performers was still doing the soundcheck. The moment the bassist signaled the start of their set, a thunderous round of applause and yells followed.

The musicians invited a downpour of hard-hitting emotions through their first number "Dala ng Ulan." They then led the spectators to "Pavement" before taking them to "Walang Bintana." "Nandito," they sang, ending with "Red Heaven."

The bar was literally packed like sardines—and for a relatively newly formed-yet-already experienced group at that.

The band? An all-female group named General Luna, now marching into the local music scene. The quintet was hailed as NU107's first "Rock Recruits" for the month of April.

NOT JUST ANOTHER ALL-GIRL POP-ROCK BAND. The members didn't actually make the name for their band. "We're all girls, yes, but we don't wanna live by the fact that we're all girls," says lead vocalist Nicole Asensio in an exclusive interview with PEP (Philippine Entertainment Portal). "Gender shouldn't matter in music; it should never have, and I don't think it should today. So we wanted to have a name that's gender-ambiguous."

The name came from a sort of contest held among music aficionados. "The winner named us 'General Luna.' It fits us because we wanted nga something that's gender-ambiguous; you don't really know if we're guys or girls. 'General' is masculine and 'Luna' is feminine," explains Nicole.

How did these five gifted individuals, who have both the killer looks and killer skills, come together?

"We've been friends for a long, long time before forming the band," shares Nicole. "Audry and I have known each other for 15 years now; we were around 8 or 9 years old at that time. We were gymnastics teammates before and we competed together in Singapore. Bea came from Wally Gonzales and King Antares. She became a close friend of mine. Alex is the newest one that I've met. I saw her gig with her former band, Blush, in Capone's, and I dig her style. Si Caren naman, we were against each other sa Muziklaban '07 (Nicole fronted finalist Crowjane while Caren fronted and played guitar for power metal group Sanctus), so akala nilang lahat nag-aaway kami."

As for their musical genre, Alexis says: "We're a rock-based band, not a purely rock band. But we're open to playing any kind of music as long as we base it on and get to rock!"

General Luna is set to release their eponymous debut album during the last week of June. The 12-track album will be released by Warner Music Philippines.