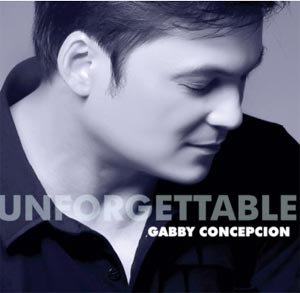 Award-winning actor-turned-singer Gabby Concepcion pays tribute to the memory of his late father with the release of his second album, Unforgettable, under Warner Music Philippines.

In 2008, showbiz's prodigal son returned after 13 long years. Upon his arrival, Gabby Concepcion immediately charmed his way back to people's hearts and conquered the industry all over again.

Within two years, he made the cover of different magazines; starred in three teleseryes (Iisa Pa Lamang, Dahil May Isang Ikaw, and Kung Tayo'y Magkakalayo); topbilled two movies (I Love You, Goodbye and I'll Be There); and even delved into music with a self-titled album, which became a certified Gold Record.

Gabby continues to brandish his enduring star power with the release of his second album, Unforgettable.

The 15-track revival album under Warner Music Philippines features timeless tunes of old and new as selected and interpreted by the former matinee idol himself. According to Gabby, the album holds a special place in his heart because it is a collection of his dad's personal favorite tunes.

The actor-singer's father, Rollie Concepcion, passed away in September 2008, due to a heart ailment. In his dedication note, Gabby writes: "When he was still alive, he used to play these songs at our terrace. I wanted to sing some songs that made me feel good...songs that bring back memories, most significantly... memories about my dad."

If the first album proved that Gabby can sing, Unforgettable confirms he's a crooner.

Gabby breathed new life to the standards "Moon River," "Can't Take My Eyes Off You," and "Cool Change" with his up-tempo renditions. A contrast to his slow and velvety take on "Head On My Shoulder," "Have I Told You Lately," and "Reminiscing."

Dean Martin's "Sway" brings out the suave side of Gabby, while "Smile" and "You've Got a Friend" show genuine sincerity in the singing actor's voice. Gabby nails the high notes in the OPM ballads "How Did You Know" and "It's Over Now."

His soulful delivery of "Save the Last Dance for Me" and "Unforgettable" remains faithful to the originals, which is appropriate considering the distinctiveness and reputation of both numbers.

"Fly Me to the Moon" has a nice danceable beat to it. The most unexpected from the lot is Maroon 5's "Sunday Morning," which surprisingly shows that Gabby is well at ease in dishing out modern pop music.

The whole album is polished and tasteful. But there isn't much vocal variety as Gabby obviously channelled Michael Bublé throughout. It might have also been a conscious decision on the actor-singer's part to remain loyal to the original versions as heard and remembered by his late father.

The song selection reveals many facets of the man. It would have made the record more interesting if a few classic Filipino tracks delivered in the vernacular had been included in the mix.

All in all, Unforgettable's easy listening vibe summons a light and hopeful mood.

Bonus Track: It's Over Now