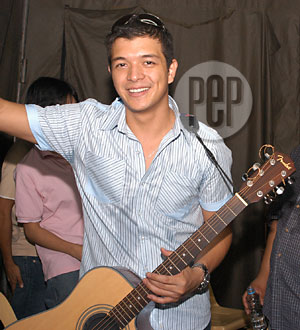 Echo makes that big shift to being the leader of the rock band Jeans.

People trooped around the fountain area of Robinson Galleria last November 24 to listen to Jericho Rosales and his band sing hits from their latest album, Loose Fit.

The band—which offers a unique fusion of pop, rock, and light jazz—is on tour since November 4 until December 10.

Jeans’s frontman Echo (Jericho’s nickname) told PEP that he had a very close relationship with his fellow band members. “[We have a] very brother-like relationship. Very deep. It’s like finding four more Echos.”

When asked to elaborate why they chose the title Loose Fit for their debut album, he says, “Why Loose Fit? We’re called Jeans and we thought it would be catchy.”

Loose Fit has 14 tracks with ten songs in English and four songs in Tagalog. The original compositions were all written by their lead singer—Jericho—and has universal themes touching on life, love, nature, and relationships.

The debut CD contains “Nightsky,” “What Are We Doin’,” “Kasama Ka,” “Keep Off The Grass,” “Mr. Mart,” “Tuwing Nakikita Ka,” “You’re So Beautiful,” (with harmony vocals from Heart Evangelista), “Ngayong Gabi,” “She’s the Dream,” “Flyin’In Flyin’Out,” “Comin’ Out,” and “Swim.” It also includes the song “Panday,” the theme song of his now defunct fantaserye in ABS-CBN, also with the same title.