The Loboc Children's Choir will perform in QC on September 8 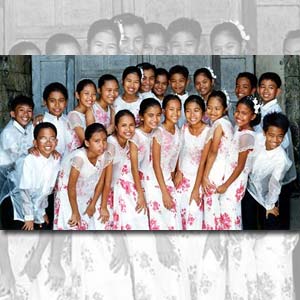 The Loboc Children's Choir will hold a concert titled In the Loboc Heartland on September 8, 2010 at the PETA Theater Center in Quezon City.

MANILA, Philippines—Voices, so pure and angelic, burst through the gathering silence and darkness of the tropical evening as thirty children get together for their daily choir rehearsals. Most evenings like this happen at the center of the small town of Loboc, the "Music Town" of the island Province of Bohol. The angelic voices belong to The Loboc Children's Choir.


This group started as an ordinary school choir, established to perform during school and community events. Composed of thirty schoolchildren between 9 and 13 years old, who all attend the Loboc Central Elementary School, the choir has blossomed into one of the most outstanding choirs in the Philippines today.


Luckily, the choral, dubbed as the "cultural treasure" of their home province, is having a short trip in Manila. For the two weeks that they are here, their voices will echo brightly within the walls of Quezon City's artistic hub: The PETA Theater Center. It is in this venue where they will perform a live vocal score for PETA's newest play, Ang Post Office, and present a concert of their own.


For their concert, the choir will be singing a combination of classical, folk, modern, pop and show choir pieces as well as special numbers with two other local artists, Noel Cabangon and Bodjie Pascua.


As a live vocal choral for the play Ang Post Office the choir will be chanting and singing songs that are inspired by the fusion of three musical motifs: Philippine Ethnic styles, Asian Modes and Western Music.


In its 23 years of existence, the choir has received great adulation and admiration from an overwhelmingly impressed local and international audience. However, the Loboc Children's Choir is not only heard in concert halls or auditoriums, but also in prisons, hospitals, orphanages, and homes for the aged, where its music of hope, love, and joy also find its meaning.