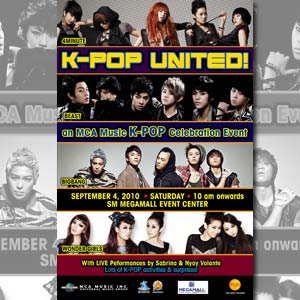 On September 4, 2010, experience K-POP fever at its peak as MCA Music, Astroplus and SM Megamall bring you K-POP United! Although the Korean bands will not be present, fans will be able to enjoy the music of these singing groups: 4Minute, Beast, BigBang and the Wonder Girls. These Korean superstars are part of MCA Music's growing roster of K-pop artists.

K-pop fans clubs in the Philippines will also organize games and photo opportunities on this special day and they also plan to raffle off various prizes for album buyers during the event.

To add some local flavor to the festivities, Asia's acoustic sweetheart Sabrina and the King of Acoustic Pop, Nyoy Volante, will grace the event and perform some of their signature hits.

A major highlight of the celebration would be the official Philippine album launch of 4Minute's Hit Your Heart.

Also on sale during the event through Astroplus are the albums of Beast, BigBang and Wonder Girls.

MCA Music, who recently partnered with CUBE Entertainment in Korea that also takes care of the career of K-Pop boy band BEAST, released the first mini-album of 4Minute titled For Muzik. Their hits "Hot Issue," "Muzik" and "What A Girl Wants" have all enjoyed heavy airplay by top music channels and radio stations, making the group one of the most popular Korean acts to ever hit the country.

The group describes their music as Candy Funky which in detail means Candy (colorful and sweet) + Funky (defiant, retro and free).

After 4MINUTE's visit to the Philippines last February, this quintet from South Korea has gained numerous Filipino fans. Their latest album, Hit Your Heart, featuring the singles "HUH" and "I My Me Mine." The album includes a DVD that contains behind-the-scenes footage of their Philippine promo tour.

BEAST - The members of BEAST contribute to the singing group through their talents in singing, dancing and rapping. Their solo capabilities make them a powerhouse group in the world of K-pop.

In October 2009, PLAYCUBE Inc. introduced the public to BEAST, which was composed of 6 members, namely Du Jun Yoon, Hyun Seung Jang, Jun Hyung Yong, Yo Seop Yang, Gi Kwang Lee, and Dong Woon Son. Even before the group was formally launched, fans all over Asia had high expectations since three of the members, specifically Gi Kwang, Du Jun and Hyun Seung already had their own set of fans.

Right after the release of their 1st mini album, BEAST received the Rookie Music Award from the Korea Creative Content Agency. The group was also named Rookie of the Month by the largest Korean community portal Cyworld because of their remarkable activities in the music charts. Due to their huge popularity, they even have a Philippine counterpart made up of 6 boys who fondly call themselves BEST.

BEAST is led by its charismatic leader, Yoon Doojoon while the dance masters are Jang Hyunseung & Lee Kikwang. Providing the vocals for the group are Yang Yoseob and Son Dongwoon while the resident rapper is Yong Junhyung. They recently conducted their Asian tour, allowing them to visit the Philippines, Singapore, Malaysia and Japan. They've also been winning awards because of their single "Shock," which is part of their second mini Album called Shock of the New Era.

BIGBANG - BigBang, a South Korean boy band composed of members G-Dragon (leader), T.O.P., TaeYang, DaeSung and SeungRi, is one of the biggest and most successful groups in Asia today. The boys made their debut in Korea on August 19, 2006, and have since then conquered the hearts of fans across Asia and around the globe.

In 2006, the group released 3 singles in Korea, followed by a full album in December and held a very successful first major concert, The Real, to cap off the year. A year after their debut, the group launched their first EP, Always, with the title track "Lies" topping the music charts, marking their breakthrough success in the Korean music industry and garnering them numerous awards in 2007. In 2008, they ventured into the Japanese market with their first Japanese release, For the World, followed by successful releases and concerts both in Korea and in Japan.


Last year, they launched their first self-titled, full-length Japanese album under Universal Music, debuting at number 2 on the Oricon Charts. The same album was released in the Philippines on October 28, 2009 by MCA Music, selling over 3,000 copies to date. Big Bang started 2010 with a bang as they held successful concert tours in both Japan and Korea, and are currently preparing for their Korean comeback set in October.

The members have also successfully embarked on their solo careers, proving their talents and passion for their craft as they ventured into acting in dramas, musicals and movies, hosting and even producing their own music.

WONDER GIRLS - Year 2009 marked the beginning of the so-called "KPOP Phenomenon" when the song "Nobody" by the Wonder Girls became a monstrous hit as it spread like wildfire over the radio airwaves, TV and the Internet. The lyrics, melody and even the choreography of the song made a huge impact among Pinoy music aficionados.

The Wonder Girls is a South Korean girl group under JYP Entertainment--one of the top Korean Entertainment Agencies recognized for building top Korean global stars. The all-female group rose to popularity in the fall of 2007 with the song "Tell Me," which became popular among Koreans for its hypnotic dance track. They have scored three consecutive #1 hit singles namely "Tell Me," "So Hot" and "Nobody. In fact, the group has been dubbed as "Korea's National Sisters."


In 2009, the group began their entry into the American market via their signature song "Nobody." The single was in fact, the very first Korean song ever to hit the Billboard Hot 100--a very rare achievement which you can only attribute to the Wonder Girls.

The Wonder Girls debuted with 5 members namely Sunye, Yeeun, Sunmi, Sohee, and Hyunah. In the middle of 2007, Hyunah left the group by her parents due to their concern over her health and later again made her comeback in the Cube Entertainment's girl group, 4Minute. Yubin, a JYP trainee took her place. In early 2010, it was announced that Sunmi would be postponing her musical career to pursue an academic career; which is why another JYP trainee named Hyelim took her place. Even with unexpected changes in line-up, the Wonder Girls have successfully completed their 1st U.S. Tour as well as promotional activities in South Korea, the United States and South East Asia.

Unlike other K-POP groups, The Wonder Girls continue to charm not only their K-POP fans but the world as a whole as they conquer the international music scene. They are definitely poised for international stardom with their latest album titled 2 Different Tears.