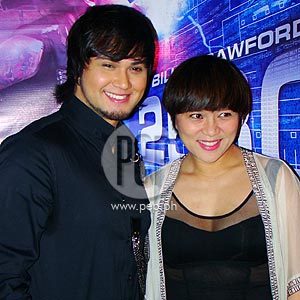 Billy Crawford describes what's going to happen during his anniversary concert dubbed 25 B.C., "Gusto namin, from the first time na makikita niyo po kami, iba-iba po ang mararanasan ninyo. It's the 25 years recap of my life in the music industry." He is photographed above with dance guru Georcelle Dapat-Sy, the director of his concert series that will be held at the Music Museum starting September 11.

Billy Crawford looks back on his 25-year career in show business by doing a series of concerts called 25 B.C. Watch him perform songs that will reflect his musical journey at the Music Museum, Greenhills, San Juan.

For three consecutive Saturdays starting September 11, the former child star will be showcasing what he calls "the 25 years recap of my life in the music industry." Joining him on this musical journey will be Popstar Princess Sarah Geronimo and other special guests. Billy's girlfriend, Nikki Gil, will also be part of the concert series.

The concert will be directed by dance guru Georcelle Dapat-Sy. She said that they will try to cover all the important events in Billy's showbiz life.

Georcelle also pointed out that for several years, Billy focused on his career abroad, so for his 25th anniversary concert, she would present Billy as a local music artist.


In 2003, Billy bagged the "International Male Artist of The Year" in the NRJ Music Awards in Cannes, France. Internationally, he has sold more than two million records. In 2001, his hit song "Trackin'" topped charts in France and was certified platinum (more than 500,000 copies sold). The track also landed No. 1 in Holland, No. 2 in Belgium, No. 3 in Switzerland, and No. 20 in Germany. His second album Ride was certified gold in France (100,000 copies) within just a few weeks and reached gold status in Switzerland.


The former That's Entertainment star is currently an ASAP XV mainstay and the co-host of ABS-CBN's afternoon game show Panahon Ko 'To.

"We want him to be more Pinoy," she explained. "Kasi, matagal na nating hindi nakita si Billy as a concert artist here. The last time he had a concert in Araneta, he was the international R&B sensation. This time, he's an international artist na Pinoy na Pinoy. So, kung ano ang na-miss natin kay Billy, 'yon ang papakita natin."