Isabella wants her iDENTitY to reach out and inspire people 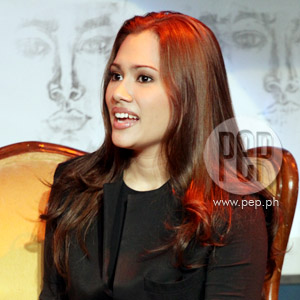 Isabella, daughter of Pop Diva Kuh Ledesma, recently launched her solo album titled iDENTitY. The singer-songwriter wants to make her own "dent" or impact in the Philippine music scene with her "alternative inspirational" songs.

Isabella's solo album iDENTitY speaks of what she wants to accomplish in show business—to make her mark and be recognized for her own talents. To have her own identity.

Being the unica hija of Pop Diva Kuh Ledesma (with businessman Louie Gonzalez), Isabella confesses it's not easy stepping out of her mom's shadow. She also accepts that people will always compare her to her mother.

One of the most pressing questions asked during Isabella's album launching at the Teatrino Promenade Greenhills in San Juan City, last September 2, was: What is it that will make her different from her mother?

"Oh, that's a hard question, she's done everything!" exclaimed Isabella, as PEP (Philippine Entertainment Portal) and other invited reporters waited for the rest of her answer. Isabella admits Kuh Ledesma, the Pop Diva, is a tough act to follow. But the 25-year-old singer-songwriter says her music is something her mom has not done before. "Okay...I think what will make what I do different from my mom's is the fact that, these are completely new songs that my mom has never sung before. I think that's what will make this different."

Isabella labels her music "alternative inspirational," a bit different from the standard Filipino pop songs her mother became known for.

Isabella also believes she has more venues in expressing herself, being involved not only in singing, but also in other artistic pursuits, like acting, creating music videos, songwriting and painting.

She presents, as an example of her self- expression, the different paintings she exhibited inside Teatrino that night.

"I wanted to feel more connected to the fact that I also came from the background of painting. So that's what I wanna do. I want to incorporate different channels and make it [music] multi-sensory," Isabella shared.

Produced by Bravo Records and distributed by Viva Records with the support of the Music Museum Group and Mossimo Music, iDENTitY contains 12 songs, two of which are revivals. The carrier single is Isabella's remake of the REO Speedwagon '80s hit "I Can't Fight This Feeling (Any Longer)" which premiered on five FM stations last August 9.

There is also a song written and composed by Isabella's father Louie Gonzalez, titled "Dance In Your Light," which she sung that night as her opening song.

Curiously, the title of her album is spelled and written as iDENTitY instead of the normal "Identity." Isabella explains, "[It's] because I long to make a D-E-N-T or impact on You. That's why I chose that word, and because my iDENTitY is firmly established in who I believe in and the change that He has made in my life, the fact that I write from the standpoint of a new iDENTitY that I have in Him."

FINDING HER VOICE. Isabella confesses she really doesn't want to be part of the world her mom lived in. "I started running away from singing talaga. I ran away from singing to painting. But while I was in school and making sawdust out of wood, and making clay out of that sawdust, and then I started to ask, 'Is this really what I want to do forever?'

"And then He led me to these words, and then I knew from just seeing words that, it would be through words how I would be able to fully express myself. Because what I really want to do is just express myself. I want to be able to do that in many different forms. Whether it be in painting or making music videos. But through words and singing, I could really express myself fully in that way. And that's just what I really want to do. As an artist, I love expressing myself, and I also love singing," she says.

Isabella wants to bring comfort and encouragement to people through her "alternative inspirational" songs. Asked about her expectations for her album, Isabella simply says, "I just want my songs to touch people, leave an impact on them, and inspire them. That's my expectation on my album, for it to be able to reach out to people and treasure this album, as much as I treasure it."

Incidentally, Isabella's iDENTitY is in partnership with Mossimo Music's advocacy on kids born with harelip or cleft lip. The album is available at all Mossimo Stores and record bars.