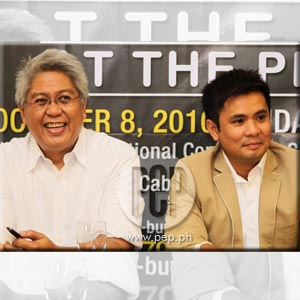 "Ang sarap mag-rehearse sa bahay nila Ogie. Every time na dumarating ako sa bahay, tumutugtog siya ng piano. I will suggest nga that Ogie will have a portion where he will play the piano," said Ryan Cayabyab (left) said about his plans for the big concert he will have with Ogie Alcasid (right). Noel Cabangon and the Ryan Cayabyab Singers will also be part of the October 8 concert at the PICC.

A much-needed boost to the local music scene will happen next month when two musical geniuses—Ogie Alcasid and Maestro Ryan Cayabyab—come together for a special musical show called O.C. at the PICC. This one-night-only concert will take place on October 8 at the Philippine International Convention Center, CCP Complex in Pasay City.

This is the first major collaboration between the two respected artists in the music industry.

Mr. C narrated that this major concert started from a small show that both of them worked on last year at the Manila Polo Club.

"The producers of that show last year decided that they wanted a big Ogie Alcasid show. I'm doubly excited because this is the first time that Ogie and I will be working together," the Maestro said during the press conference that doubled as the contract-signing of the two lead performers.

Ogie seconded Ryan's sentiments, "It's true that this is a big show that we are working on. We are thankful to our producers for believing in Filipino talent and artistry. Sa totoo lang po, bihira na po ang nag-pro-produce ng concerts para sa mga Filipino artists. Bihira po ang nagsusugal ng kanilang hard-earned money para sa mga concerts. The producers said that they wanted a big Ogie Alcasid show. That's why we brought along Mr C with me. Bonggang-bongga na."

PUSHING FOR FILIPINO MUSIC. Ryan said that he wants to bring out all the best in Ogie on the forthcoming concert.

"What makes this exciting is that, Ogie is not only a songwriter but he's also an actor and he's also a comedian. Gagawin ko talaga is I will try to exploit all of these facets of Ogie. And we want to have an unusual concert. I want people to go out and have a very light feeling and being very proud of being a Filipino.

Mr. C believes that this concert will make its mark in a music industry that is suffering from all sorts of problems like piracy and the proliferation of international acts.

Mr. C revealed that they will be playing some hits from his collection and from Ogie's list of songs. They will also be performing some George Canseco songs, some of which are included in Ogie's latest album called Ngayon at Kailanman: A Tribute to George Canseco. Another is a tribute to Willy Cruz, another great Filipino composer and lyricist who is responsible for songs like "Let The Pain Remain," "May Minamahal," "Pangarap ng Bituin and "Sana'y Wala Nang Wakas."

The October 8 concert, which will have the OPM (Organisasyon ng Pilipinong Mang-aawit) as the beneficiary, will also include Noel Cabangon and the Ryan Cayabyab Singers.

Noel and Ogie also recently collaborated for the song, "Bagong Pilipinas" which they performed during the inauguration of President Noynoy Aquino.

FILIPINOS ARE THE BEST SINGERS IN THE WORLD. In the microblogging site Twitter, American talk show host Ellen DeGeneres stated, "I've learned 2 things about TV. It's always easier with vodka & some of the best singers are from the Philippines."

The statement by Ellen was prompted by the stellar performance of Charice who wowed her during her guesting and another young singer, Rhap Salazar, who performed on the show last year.

He believes that Charice is very fortunate to have been able to perform in American TV shows like The Ellen DeGeneres Show.