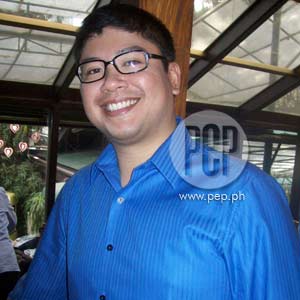 The FILharmoniKA, under the baton of Gerard Salonga (in photo) will perform on September 23 at the Cultural Center of the Philippines. On that day, the UST Symphony Orchestra will also perform for concertgoers. The 1st National Orchestra Festival will run at the CCP from September 21-25, 2010.

A first in the history of orchestra performance in the Philippines is the forthcoming 1st National Orchestra Festival 2010. It will feature seven of the country's finest orchestral groups in a series of concerts from September 21-25 at the Tanghalang Nicanor Abelardo of the Cultural Center of the Philippines (CCP).

Gerard Salonga, music conductor for FILharmoniKa, welcomes the big event since it is a first of its kind.

"I was so surprised when they told me about it," Gerard said when interviewed by PEP (Philippine Entertainment Portal) at the launching of the festival last August 25 at the CCP Main Theater lobby.

In the past there were several music festivals held in the country, but as far as Gerard could remember, "Merong music festivals, pero laging centralized na festival orchestra. This is the first time, I think, that all of us who are identified in different orchestras will be having one performance after another, in the same venue."

The younger brother of internationally-renowned singer-actress, Lea Salonga, welcomes the project as an opportunity for the Filipinos to better appreciate orchestra music.

Does Gerard think that a well-known personality should be given the task to promote or make the CCP orchestra festival publicly known?

Aside from his regular stint with the FILharmoniKA orchestra, as music conductor, Gerard Salonga arranges songs and scores music for films.

MUSIC SCORING FOR MOVIES AND THEATER PRODUCTIONS. In 2007, Gerard Salonga also provided the musical scoring of Ang Pamana (an indie horror film, directed by a Filipino-Canadian, Romeo Candido) and last year, he did the musical direction of Sweeney Todd for Repertory Philippines. For the latter production, Gerard Salonga won as Best Musical Director at the PHILSTAGE's 2nd Gawad Buhay Awards last February, 2010.

"This coming November until December naman, I'll be musical director of Little Women, for Rep again. And we're opening Resorts World Manila. Opening Gala, on November 27, the opening week. FILharmoniKa will have concerts there," Gerard informed.

Under the leadership of Gerard Salonga as music director, FILharmoniKa was formed in 2005 as the in-house recording ensemble of Carmel House Studios, a music and audio post-production facility in Manila.

Then known as the Global Studio Orchestra, FILharmoniKa has become one of the most in-demand orchestras in the country today.

The performance of FILharmoniKA, at the 1st CCP Orchestra Festival is scheduled on September 23, 2010, at 8pm, along with the UST Symphony Orchestra, to be led by orchestra music conductor, Hermenigildo Ranera.

Under the baton of Gerard Salonga, FILharmoniKa will perform Terry's Theme from Limelight by Charlie Chaplin (arranged by Gerard Salonga), Night on a Bald Mountain by Modest Mussorgsky, Yerma by Francisco Feliciano and Symphonic Dances from West Side Story by Leonard Bernstein.

BEST ORCHESTRAS. The 1st National Orchestra Festival, a brainchild of Dr. Raul Sunico, of CCP, showcases the best orchestras in the country, in an exciting and varied program of immensely enjoyable and appealing pieces, written for the orchestra.

Highlight of the event is the performance of the Festival Orchestra composed of selected members of the participating orchestras who shall be performing with the country's eminent conductors, including (aside from Salonga of FILharmoniKA): Prof. Edna Marcil "Michi" Martinez and Prof. Rodney Ambat, of the UP Orchestra; Agripino "Nonoy" V. Diestro, of the Angono Chamber Orchestra; Herminigildo Ranera, of the UST Symphony Orchestra; Jeffrey Solares, of the PREDIS (Philippine Research for the Developing Instrumental Soloists); and the French-American conductor, Olivier Ochanine, of the Philippine Philharmonic Orchestra (PPO).