Flo Rida is expected to guest in ASAP XV 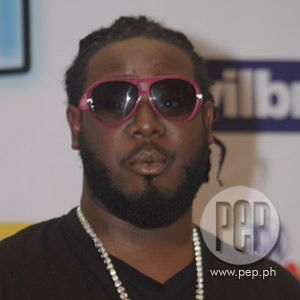 Flo Rida, Sean Kingston, Kelly Rowland and T Pain (in photo) arrived in Manila to perform for the Supafest 2010 concert at the SM Mall of Asia.


He and other popular names in R&B, namely Sean Kingston, Kelly Rowland and T Pain, arrived in the Philippines last Friday for their September 18 concert held at the SM Mall of Asia Concert Grounds.

Rapper and singer-songwriter T-Pain was the only one present in the very brief press conference for the special concert titled Supafest 2010 that brings together four of the hottest names in hip-hop and R&B. The press con was held last September 17 at the Dusit Hotel in Makati City.

At the prescon, T-Pain, whose real name is Faheem Rasheed Najm credits his start in the music industry to a stroke of luck and hard work.

"We did a mix tape. And that mix tape got big. And Akon locked us up. From Akon to Akon, Akon to everybody. By that then, time we got a record," the T-Pain said who started out as a rapper for the group called Nappy Headz.

FROM RAPPER TO SINGER. As T-Pain career began to flourish, he changed his style and went more to do singing in his singles. This was similar to moves done by Li'l Wayne and Kanye West, who were first known as rappers. One of his early hits was the single, "I'm N Luv (Wit a Stripper)," which became a staple on radio and the dance floor.

"I don't really care because nobody knew that I was a rapper first. It was easy transition for me to do it in the record world."

"I produce all my music. I write all my music. I do everything. I see other artists who don't write or create their own music. They don't produce or write. I just put a lot of energy and work to my music. It just comes from my heart," who credits Busta Rhymes and Andre 3000 of Outkast as his musical influences.

Other hit singles from T-Pain include "Bartender" and "Buy U a Drank (Shawty Snappin)." He has collaborated with other artists that include Chris Brown, Ciara, R. Kelly and Flo Rida.

SUPAFEST 2010. T-Pain was excited to do the show in the country with Sean Kingston and Flo Rida, with whom he has performed several times.

"Sean Kingston, he doesn't care if other people like him. He doesn't try to conform with what other people want. Flo Rida, I've known since way before. Just seeing all these hiphop artists coming together is cool.

"It's a friendly competition out there. Every show when we go out with them when know what style they're gonna do. It's just all about working together as a whole and doing it all together.

NEW ALBUM. T-Pain also announced that he will be releasing a new album by the end of the year.

"It looking really good," he said about his rEVOLVEr album which has been completed already. "I think in this album I'm just more mature. My music is much bigger. I go back to my first album and tell myself, 'wow! this really sucks. I wish I hadn't made that.' I really think it was good when I did it. I think I'm just better now. Everybody just evolves."

Supafest 2010 is a presentation of Wilbros Entertainment.