Korean pop idol Rain is Back to the Basic 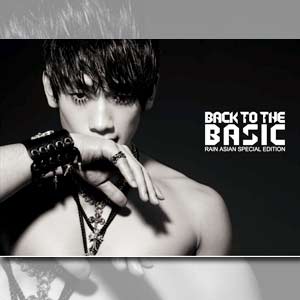 Back to the Basic is Rain's seventh studio album and is now available here in the Philippines courtesy of PolyEast Records.

The excitement generated by pop superstar Rain's Manila visit only proves that the 28-year-old singer-actor remains to be the face of Korean pop or K-pop, as fans and media label the music phenomenon.

Rain—whose real name is Jung Ji-Hoon—was here in the Philippines just recently for weeks to shoot a television series and more importantly, stage a one-night concert dubbed Intensity at the SM Mall of Asia Concert Grounds in Pasay City.

The much anticipated concert likewise coincides with the promo of Rain's latest album titled Back to the Basic—a special mini-album containing five new tracks plus a bonus DVD featuring the music video of "Love Song" and two live performances.

Ardent fans and critics commended the album for successfully highlighting Rain's diversity as a recording artist.

"Love Song" for example paints Rain as a balladeer capable of delivering romantic tunes. Rain himself wrote the said song in "less than an hour." Some fans actually expressed apprehension at first with the tune since most are not accustomed in hearing their idol belt out slow numbers.

"While admittedly the beginning kinda bored me at first listen, the chorus and emotional cries just made the song for me. I love the raw emotion in his husky voice as he sings"What shall I do?" and the soulful croon from 3:06 to 3:11 is just love," wrote one K-pop fan turned album reviewer on her blog site.

Rain returns to his signature upbeat and hip hop style of music with "Hip Song," while "One" and "Same" mixes ballad with R&B.

Completing the disc is the English version of "Love Song." Rain's growing presence in the international market certainly demands him to do another version of a single that is considered strong enough to appeal to a wide radio market outside his home country.

Rain eventually broadened his reach by trying out acting. After appearing in a number of Korean television series, the Seoul, South Korean native made it to Hollywood via the films Speed Racer (2008) and Ninja Assassin (2009).

Back to the Basic—Asia Special Edition CD plus DVD—is released under PolyEast Records thru MNet Media Korea and is now available at all record bars nationwide.