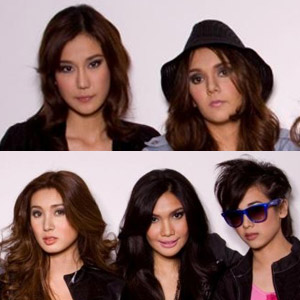 General Luna is out to make their mark in the male-dominated band scene through their self-titled debut album.

After being delayed for almost three months, the eponymous debut album of the five-member General Luna band has finally been released in the market.

Originally slated for release in the last week of June, the 12-track General Luna album officially saw the light of day via thunderously rocking launch at the Teatrino in Greenhills, San Juan City last September 10.

"The marketing people of Warner [Music] wanted to plan it right... They wanted to release it at the right time," discloses the band's lead vocalist Nicole Asensio in a short interview with PEP (Philippine Entertainment Portal) after the hour-and-a-half-long show. "And I think now is really the right time to release the album. Siyempre, tine-tiyempuhan din 'yung NU Rock Awards so it's good timing that it's released now."

During its infancy, so to speak, of General Luna, NU107 served as home to their rock-based music. The all-girl quintet was hailed as the radio station's first "Rock Recruits" for the month of April, thanks to the members' killer looks, pure talent and fresh take on the music genre adored by many aficionados.

The single "Red Heaven"--about the stomach-turning nightmare experience expressed through a combination of loud guitar riffs and catchy melodic verses--climbed to number one on NU's Stairway to Seven hit chart, proof that the girls can offer healthy competition for the male-dominated band scene.

Aside from Nicole, guitarists Caren Mangaran and Audry Dionisio, bassist Alexis Montemayor, and drummer Bea Lao complete the line-up of the band, which is dubbed as the modern-day Sampaguita.

RIDING THE WAVE. Excited but nervous--that's how Nicole felt that their album it's finally out in the market.

"Of course, we wanted to do well. There's no telling where this will go, so we just gotta ride the wave," she shares.

Asked what their fans can expect from their debut album, Nicole answers: "I don't want to preempt anything but they can expect that there's no one sound, there's a lot of different kinds of sounds when you hear [the songs in our album]. It's not one kind of rock, iba't iba."

General Luna is available in CDs under Warner Music Philippines.