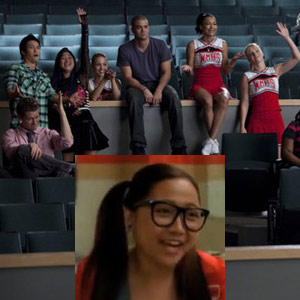 Charice (as Sunshine Corazon, inset) wowed the cast of Glee Season 2when she performed Beyonce's "Listen" for the pilot episode. Charice will come back to Manila for the David Foster and Friends concert on October 23.

Last September 28, Charice sponsored an amateur singing contest held in Gulod, Cabuyao, Laguna. This particular barrio is close to Charice's heart because her family lived in an apartment there for some time. The seven-year-old Charice was enrolled at Gulod Elementary School when she started competing in singing contests.

Currently based in Los Angeles, California, the international pop singer was able to watch and judge the performances of the contestants through Skype, a software application that allows users to make voice calls over the Internet.


Just like her Glee character called Sunshine Corazon, Charice wore her hair in pigtails and had a black beret and trademark glasses when she faced the crowd gathered in Gulod. The petite singer gave her rendition of "Telephone," the same song that she performed with fellow Glee star Lea Michelle. Their duet peaked at No. 2 in the iTunes Top 10 chart while Charice's solo number "Listen" climbed to No. 7 after debuting at the ninth slot.

During the pilot episode of Glee Season 2, her character Sunshine opted to join the singing group Vocal Adrenaline because of the promise of a condo and a green card for her mother.

She told Bum Tenorio of The Philippine Star that her weekdays are reserved for tapings of Glee, from 7 a.m. to 7 p.m. During the weekend, she writes and records songs for her second album.

In a recent interview with Wall Street Journal, Charice was asked to pick a co-star who could possibly become her love interest. The Filipina singer-actress revealed, "Actually, I kinda like Artie [portrayed by Kevin McHale]. Sunshine's character is a bit nerdy, so I think they would be cute together."

When asked to suggest a singer whose song she would like to cover in the hit American musical series, Charice gave her suggestion by saying, "Sunshine would love to dance. I would love to try a Michael Jackson song. I also haven't covered any Christina Aguilera, but I love her."

BEST SCENE IN PILOT EPISODE. In an interview with Tina Monzon-Palma on the September 28 episode of The World Tonight, Charice confirmed that she will play a recurring character in Glee.

The most unforgettable scene for her during the pilot episode was when she performed her audition piece for New Directions. According to Charice, the cheers that the cast gave during the episode were their genuine reaction to her performance of the Beyoncé song "Listen."

DAVID FOSTER AND FRIENDS CONCERT. Charice is expected to return to the Philippines to be a guest in the concert of her mentor, David Foster. Dubbed the "Hit Man," Foster was inducted into the Songwriters Hall of Fame in New York City in June 2010.

Here are the concert schedules in Asia this October: