Richard Poon will launch his latest album, I'll Be Seeing You 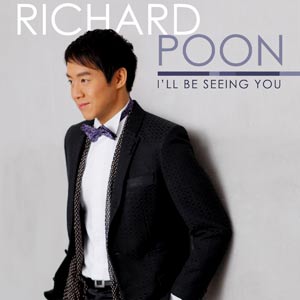 "Following the bold success of his previous, the country's award-winning and Platinum-selling crooner is back with a special offering to give a distinctive sound to timeless hits! Being the first album which includes duets, Richard Poon's upcoming album gives a new sound to standards! Also, this album features a limited edition 2011 photo calendar and a special discount from Hush Puppies.

"Clinching the recent 2010 Aliw Awards Best Concert Performer title, Richard Poon unceasingly transcends barriers as he conquers the entertainment scene with his own brand of music.

"This upcoming album features unwavering tracks such as the Original Filipino APO Classic "Panalangin," which is injected with a brilliant arrangement. Other classics "The Way You Look Tonight," "Fever" and "L-O-V-E" are performed with a big band sound, making the listening experience very rich and endearing. Richard Poon also has originals such as "Teddy Bear" which showcases his musical prowess. Fresh, young and soothing, this album unearths Richard Poon's undeniable musical artistry, infused with a synthesis of beautiful instrumental rhythms.

"Hear Richard Poon as he encompasses generational lines and give a refreshing take on timeless romantic hits! Grab a copy of his newest album I'll Be Seeing You under MCA Music available in all Odyssey, O Music and Astroplus Astrovision outlets nationwide."