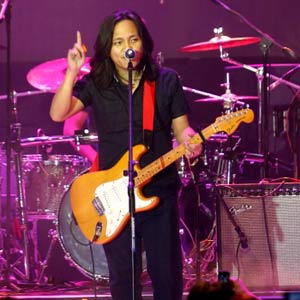 "It was never my intention to hurt anyone. The thing I like about our fans is it's a real relationship. They treat me as a friend. I've apologized for breaking their hearts and letting them down. It's just that this is something that I had to do," says vocalist-songwriter Ebe Dancel in his message to Sugarfree fans.

Singer-songwriter Ebe Dancel's decision to part ways with his band Sugarfree was not easy.

"This is not a decision made lightly," said Ebe in a statement furnished through Warner Music Philippines.

"I guess it's fatigue—all these years of playing together. We've had our share of differences, but right now, we, the band, are handling the situation very well."

Rumors of Sugarfree's demise spread like wildfire late last year after it was announced that Ebe had signed a record deal with Warner Music as a solo artist.

The band, however, pushed on and even performed at the last NU 107 Rock Awards last October 29, 2010 at the NBC Tent in Taguig City.

"When I posted my announcement, I purposely did not check the Internet. My brother was home from Vietnam for a few weeks so I wanted to spend some time with him. Then I checked the next day, I was in tears, and I have never felt so much love in all my years with Sugarfree," said Ebe.

"It was never my intention to hurt anyone. The thing I like about our fans is it's a real relationship. They treat me as a friend. I've apologized for breaking their hearts and letting them down. It's just that this is something that I had to do. How can I make people happy if I'm not perfectly comfortable where I am now?"

Despite the sad outcome, Ebe and his bandmates bassist Jal Taguibao and drummer Kaka Quisimbing remain in good terms. The frontman to proudly said, "This is probably one of the few breakups that the members of the band don't end up hating each other."

Ebe's career as a solo artist is off to a good start after TV5 executives handpicked his song titled "Hanggang Sa Dulo" for the soundtrack of its upcoming program titled 8 Kingdom. This same album will be included in his solo album to be released eventually.

The talented rocker also contributed a track to bossa nova artist Sitti's new album, which is slated to be release before summer.