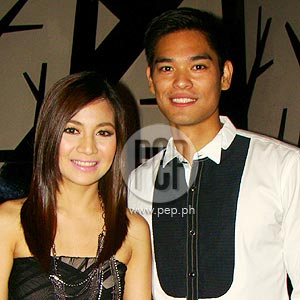 R&B artists Jay-R and Kyla give in to their fans' requests by restaging their Soulmates concert on February 11, 2011 at The Establishment in Bonifacio Global City, Taguig.

After their one-night concert last December, Jay-R said some of their fans who failed to watch requested a repeat.

"Nagre-request sila, 'Pahingi naman ng isa pang concert.' So, ito na ulit. It's perfect timing for Valentine's so, we're gonna grant them their wish," said Jay-R during the media junket prepared for him and Kyla at The Establishment last Friday, January 28.

Jay-R and Kyla will be doing almost the same lineup they did last time. However, according to the Prince of R&B, "May konting adjustments lang for the Valentine's Day. Maybe more of the love songs."

These music celebrities also promise to showcase a diverse repertoire featuring Motown classics, heart-melting ballads, funk-flavored grooves as well as their OPM hits. The show will be directed by Freddie Santos, with musical direction by Marvin Querido.

"WE JUST ENJOY SINGING TOGETHER." The partnership of Kyla and Jay-R has been lucky enough to stay away from intrigues. Although they look like a real couple on stage, both manage to keep their personal relationships away from the public eye.

The restaging of Soulmates next week will also be the pre-Valentine celebration of Kyla and Jay-R with their significant others: Rich Alvarez and Krista Kleiner, respectively.

When they were just starting out, fans believed that they could be a real couple. However, Kyla said, their followers have learned to accept that the chemistry they have is reserved only for the stage.

"It's different in real life and when we're on stage nagta-transform kami into performing people. Parang we just enjoy singing together."

Jay-R agreed by saying, "It's on the stage talaga. We have great chemistry when we're singing together."

Witness how Jay-R and Kyla become a perfect match on stage during their Soulmates concert on February 11 at The Establishment, Bonifacio Global City, Taguig.