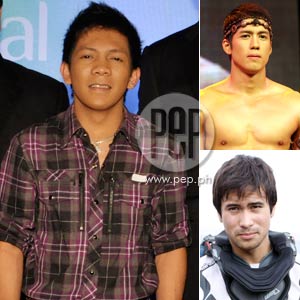 Pilipinas Got Talent grand winner Jovit Baldivino (main photo) will bring his Faithfully concert to the Waterfront Hotel in Lahug, Cebu on February 11 and to the Music Museum in Greenhills, San Juan on February 26. One of Jovit's guests for the Cebu concert is Kapuso hunk Aljur Abrenica (top inset), who will take over the spot initially reserved for actor-singer Sam Milby (bottom inse

Singer Jovit Baldivino's upcoming concert at the Waterfront Hotel in Lahug, Cebu on February 11 is a dream come true for the former siomai vendor turned Pilipinas Got Talent Grand Winner.

Although he is a proud son of Batangas, Jovit's father is actually a native of Cebu—making the forthcoming concert a homecoming of sorts for the singer and his beloved dad.

The Cebuanos supported Jovit's bid in Pilipinas Got Talent by boosting his text votes throughout the contest, leading to the Grand Finals staged at the Araneta Coliseum last June 13, 2010.

Jovit treats his pre-Valentine's Day show as a "gift" to his Cebu-based supporters and as a way of showing his gratitude to all the people who helped him win the local franchise of the talent reality show.

He is also looking forward to spending time with his cousins while in Cebu as well as to finally meet some of his other relatives.

Jovit will then fly back to Manila to hold the concert titled Jovit Baldivino... Faithfully at the Music Museum in Greenhills, San Juan on February 26.

ALJUR AS GUEST. Jovit's special guests for the concerts are fellow PGT finalist Markki Stroem, Pinoy Big Brother's Jason Francisco and Melai Cantiveros, and acoustic singer Nyoy Volante, who will also sit in as musical director for both shows.

The inclusion of GMA-7's Aljur Abrenica in the guest list for the Cebu engagement stirs the curiosity of the press brought about by the fact that the hunky actor belongs to ABS-CBN's rival station.

Edgar Mangahas of MJM Productions explained that the guest slot was originally allotted to actor-singer Sam Milby but schedule problems hindered the negotiations and the producers decided instead to invite another artist.

STILL NERVOUS. It wouldn't be the first time that Jovit will headline his own concert.

Barely five months after emerging as PGT's first champion, Jovit performed at the Aliw Theater on November 13, 2010 before a jampacked crowd composed mostly of cheering fans and friends.

That Jovit was entrusted to stage a repeat of his solo major concert only shows the magnitude of trust placed in him by the producers.

Add the fact that putting up a show on the month of February will always certainly face tough competition from both local and foreign acts.

Jovit confessed that the pressure of performing before a huge crowd will always be there regardless whether it is his first show or just another one in a string of many.

It is worth noting that Jovit fully understands the importance of showmanship as he values the technical elements needed to deliver a satisfying performance.

KEEPING HIMSELF GROUNDED. Jovit's sudden change of fortune has admittedly altered his past simple yet challenging life routine.

Before, one could easily spot Jovit roaming the streets of Batangas while peddling siomai to support himself and his family.

Nowadays, Jovit still supports his family although he's doing it this time as a singer and celebrity shuttling from one location to another with trailing cameras following his every move.

Adjusting to life in the spotlight is a continuing process and Jovit fondly enumerated some of the things he misses the most before making it big in the entertainment business.

Jovit follows one important reminder to keep himself grounded at all times even as he enjoys his newfound fame.