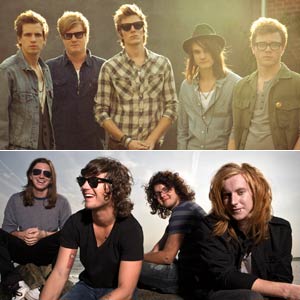 With limited time here in the Philippines, starting today, February 17, until the 20th, three foreign bands offering good music coupled with good looks, will be seen and heard at Ayala Malls.

We The Kings, The Maine, and Never Shout Never, had all their beginnings through the social networking site, MySpace.

Members of the press got a chance to meet and greet the members of the The Maine and Never Shout Never yesterday, February 16, at the Hard Rock Café, Glorietta 3, Makati City.

Christofer Drew, vocalist of Never Shout Never recounted candidly, "I dropped out from high school. I didn't know what to do with my life. I was always on MySpace, then I started putting out my songs there...then people started checking it out and downloading...."

The two bands creatively describe what type of music they are offering to the Filipino audience.

On the other hand, John of The Maine calls their music as "Emo Gospel."

The Maine played their first front show in front of over 600 fans, acquired solely through word of mouth and MySpace. In 2007, they released aa five EP-song called Stay Up, get Down. The following year, they released their first full-length album Can't Stop, Won't Stop just before touring with Good Charlotte and Boys Like Girls.

Just last year, The Maine release yet another album titled Black & White and very recently released their newest LP titled In Darkness and In Light that includes a 17- minute short written film written, scored, and created with the help of their friends.

Meanwhile, songs crafted by Never Shout Never can be considered feel-good and optimistic. With their music influences from The Beatles and Beach Boys, 18-year-old Christofer has over 55 million hits on his MySpace account for his songs.

In 2008, Chistofer self-released The Yippee EP and has sold more than 30,000 copies. Two more EPs soon followedMy &My Uke and The Summer EP.

Never Shout Never become one of the top new acts of 2009, crowned by winning the MTV Woodie Award.

Early last year, the band released a debut mini-album titled What is Love.

The Maine and Never Shout Never, together with We The Kings will perform live here in Manila on the following dates: