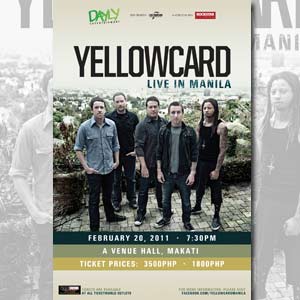 Catch American band Yellowcard on Sunday, February 20, at the A-Venue Hall in Makati City as they perform past hits and current songs included on their latest album, When You're Through Thinking, Say Yes .

The A-Venue Hall in Makati City will play host to the Manila concert of American pop-rock band Yellowcard scheduled this Sunday, February 20, 2011.

Currently in the middle of a world tour to promote their seventh album titled When You're Through Thinking, Say Yes, the Los Angeles-based quintet will dish out some of their well-loved hits like "Way Away," "Only One," "Light Up the Sky," and "Empty Apartment."

Fans of the hit cable program One Tree Hill are, of course, familiar with "Empty Apartment," as it was used as a soundtrack in one of the episodes of the hit teen drama series.

The band figured prominently in modern rock charts as proven by Lights and Sounds 4th place finish on the Billboard Hot Modern Rock Tracks in 2006. Some of the tracks on the album even made it to the video games Burnout Revenge and Guitar Hero: Modern Hits.

Paper Walls, on the other hand, peaked at the 13th spot on the US Billboard 200 after selling 74,000 copies in just its first month of release. The album's lead single "Light Up the Sky" clinched 32nd spot overall on the US Billboard Adult 40 Top Tracks.

Yellowcard's decision to go on an indefinite hiatus for two years only made the band determined to prove that they're indeed a much better unit than before.

Filipino fans would be proud to know that the Philippines is the band's only Southeast Asia stopover.

As an added bonus, Yellowcard's Greatest Hits album will only be available here in our shores.