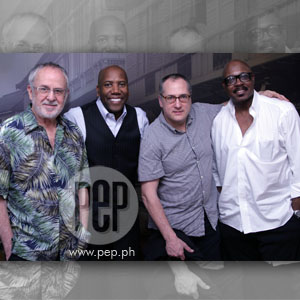 Jazz supergroup (from left) Bob James (keyboards), Nathan East (bass and vocals), Chuck Loeb (guitar), and Harvey Mason (drums), are in town to perform at the ABS-CBN Jazz Night. It will be held tonight, February 25, at the Rockwell Tent. They are performing with Mishka Adams and saxophonist Jon Irabagon.

Considered by many as a supergroup, the quartet of Bob James (keyboards), Nathan East (bass and vocals), Chuck Loeb (guitar), and Harvey Mason (drums), collectively known as Fourplay has enjoyed consistent commercial and artistic success by grafting elements of R&B and pop music into their stanch jazz foundations.

In the course of a dozen recordings--six of which have climbed to the top of Billboard's Contemporary Jazz Album charts--Fourplay has continued to explore the limitless dimensions and permutations of jazz while at the same time appealing to a broad mainstream audience.

Fourplay is the also the only band in U.S. music history bestowed with a Congressional Record, given by the U.S. Congress, recognizing them as distinguished members of the American music industry.

"Yeah, I think we really love the feeling of being the ambassadors for the American music, and jazz being a uniquely American art form, to represent it around the world," shares 71-year-old Bob in a mini-press conference held today at the Escolta Restaurant at the Manila Peninsula in Makati City.

Bob, a founding member of the 20-year old Fourplay along with Nathan and Harvey, is considered one of the progenitors of the "smooth jazz." His 1974 solo work "Nautilus" from his album One, and "Take Me To the Mardi Gras" from the 1975 album Two, were two of the most sampled instrumentals in hip hop history.

"We've had great opportunities to come to the Far East, this is our first time performing in Manila, which is really great for us, we've recently performed in Taiwan, we performed in China, we performed many times in Japan, and we're going next week to perform in Indonesia. So, it's long travel to get over here, but what we're very excited about is the opportunity to make new fans, and that music, our music, maybe we're introducing it to people for the first time and hopefully we'll make new friends and new fans that will continue to listen to us," adds Bob.

The band is part of the ABS-CBN Jazz Night concert to be held at the Rockwell Tent in Makati City at 7 pm tonight. Performing also in this concert are local artists Mishka Adams and Jon Irabagon.

Mishka broke into the local music scene when she guested as a singer in the British Council-sponsored concert Jazz in Time, where she sang the Billie Holiday classic "God Bless The Child." She was later signed by indie record label Candid Records Philippines. Britain-based Candid has a stable of international jazz artists.

Her 2005 album was titled after the Holiday song that struck the jazz audience with awe in Jazz in Time.

Jon Irabagon, on the other hand, is a De Paul University and Manhattan School of Music-schooled saxophonist who has made a name for himself in the New York free jazz scene. Last year, he made his debut as the leader of his own band called Outright!

ABS-CBN Jazz Night is part of the annual Philippine International Jazz and Arts Festival 2011, which is ongoing until February 27.