American band Good Charlotte excited to be back in Manila 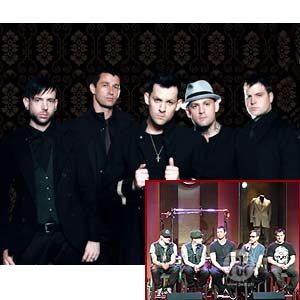 Good Charlotte makes a return visit to Manila in time for the punk-pop band's 15th year anniversary in the music business. The hit-making quintet will perform on April 6 at 6:30 p.m. at the Glorietta Activity Center in Makati City.

American punk-pop band Good Charlotte returns to the Philippines and will perform tonight, April 6, at the Glorietta Activity Center in Makati City.

"It was such a good experience the last time we were here," said Joel. "We made friends and we're excited about coming back."

The local media had the chance to meet the band up close and personal in a press conference held yesterday, April 5, at the Hard Rock Café in Makati City.

Formed in 1996, on April Fools Day no less, Good Charlotte has managed to withstand all the internal and external issues that are commonly experienced by any band.

While creative and personal clashes are inevitable, the group's collective desire to play music and push their limits have kept them together right from the beginning.

They cited the reputation of some of their influences like Weezer and Beastie Boys—describing both acts as "bands with no rules"—as constant source of inspiration for them to continue creating music regardless of trends and chart positions.

"That was kind of always our goal, is to be a band that was not confined to a certain genre or confined to, you know, making a certain type of record—and that is still our vision," revealed Joel.

"We want to continue making record that we love and push the limits a little bit and inspire other kids to start a band."

Serving as inspiration to young musicians is not at all wishful thinking on the part of the band considering the fact that all of their five albums, along with the hit singles, have reached a global audience.

Since the release of Good Charlotte's self-titled debut album in 2000, the band has churned out The Young and the Hopeless (2002), The Chronicles of Life and Death (2004), Good Morning Revival (2007), and their 2010 effort Cardiology.

Apart from the band's breakthrough single titled "Lifestyles of the Rich and Famous," Good Charlotte has also delivered the radio hits "The Anthem," "Hold On," "Predictable," I Just Wanna Live," "The River," "Dance Floor Anthem," and "Like It's Her Birthday."

"So, just by starting a band, and writing a song, and following your dream, it's kinda crazy to think about when you come to a place like a Manila—a place you hear about and you never thought you'd get to come.

"Just being in Manila today, I was just looking at the window, we're so far and just being a few days after celebrating the 15th year anniversary of the band. We're so far from where we started and it's very special... we never take it for granted, so thank you guys!"