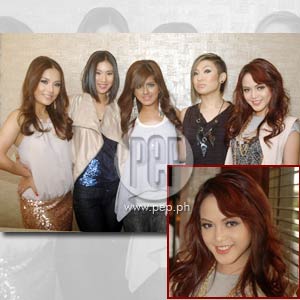 After their long journey besting all the others from the Hongkong-based talent search Project Lotus, five girls from five different countries in Asia come together to make music through a girl band─Blush.

According to John Niermann, Founder and CEO of Farwest Entertainment, the agency that manages the band, they envision the girl band to "bridge the East with the West through music."

"My wife Stacy and I have been staying here in Asia for 15 years and we come across all the amazing talents," he said during the press conference of the group last Wednesday, April 6, at Tosca Restaurant in Dusit Hotel, Makati City.

He continued, "We decided to bring it to the West. And we wondered why they haven't made it that big so we did this because we are finding a way to bridge East with the West in a girl group and we thought to represent Asia from each of the countries."

The five members of the band are from China, South Korea, India, Japan, and the Philippines.

Pinay member Angeli Flores was born and raised in Marikina City. She was a student in College of Saint Benilde before she was able to grab this opportunity.

"I feel really really blessed and I'm so happy that I could share music with these girls and now I could share it to the world as well," Angeli told PEP.

Angeli is proud to be a Filipina. She also feels honored to be given the chance to follow the footsteps of the other Filipinos who have paved the way and built their names in the international music scene.

"I think that being your self is really important so I just be myself and give them my music," Angeli said of how she plans to make a name of herself.

The four other girls also expressed their joy in being part of the premiere all-girl Asian group.

"It has been a real blessing spending time with these girls and I learned a lot from them. It has been a great ride and great journey," Victoria said.

Ji Hae added, "I am so happy and we are all from different countries and we can be that one through the music so I'm so happy about that."

WORLD CLASS. Stacy Niermann, the talent manager of the group describes "her girls."

"These girls are so talented... world class. And the Philippines, specifically, we saw that everybody sings well, amazing!

"And Angeli's voice is unbelievable as the rest of the girls as well. Each girl has her own personality, her own style, her own attitude, and her own individual talents for the group," she said.

Victoria (Japan) attended the Music Choir Programme at the HongKong Academy of Performing Arts. She was also part of the 2008 Beijing Olympics Torch relay song, "Light the passion, share the dream."

On the other hand, Alisha (India) had also backed-up for artists Eason Chang and Coco Lee.

Interesting to note is that Ji Hae (South Korea) studied law in Hoseo University. She then pursued her dreams of becoming performer after giving in to her parents' wishes of taking up law. She has also participated in Superstar K, Korea's biggest audition program

On the other hand, Natsuko (Japan) was part of a dance crew who participated and wno first place in various competitions.

The girls have their first release titled "Undivided."

Asked to describe their music, Alisha said, "It is sort of pop with a mix of different tasts from each of the countries."

Angeli exclaimed, "I hope our music will make them blush!"

"...and bring positive energies into people's lives," Alisha followed up with a smile.