Team Philippines for WCOPA introduced in a fundraising concert 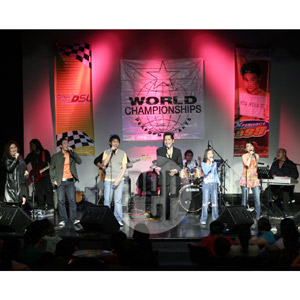 Carlo Orosa, (center, in a black suit) newly-licensed World Championships of Performing Arts national director for the Philippines, performs with 2007 WCOPA Team Philippines during the fund-raising concert at Teatrino.

Carlo Orosa, newly-licensed World Championships of Performing Arts (WCOPA) national director for the Philippines, presented to sponsors and the media this year's Team Philippines that will compete at the 11th Annual WCOPA in Hollywood, California, during a fund-raising concert held last June 15 at Teatrino, Promenade, Greenhills.

Ida Henares, former WCOPA National Director for the Philippines and Jed Madela, 2005 WCOPA Grand Champion Performer of the World, were at the affair to show support for the 2007 Team Philippines.

WCOPA is often cited as the one and only "official Talent Olympics" for performers and entertainers. After 11 years of incredible growth, it is the only premier international talent and modeling competition of its kind annually held in Hollywood, the entertainment capital of the world. Similar to the Olympics, only invited and qualified competitors (called Worldstars) representing countries vie each year in a fierce competition for the "Grand Champion Performer of the World" titles.

There are three rounds of competition. The first will determine the medalists: Gold, silver, and bronze. The medalists move on to the second round of competitions to determine overall World Champions. Outstanding and entertaining performers chosen during the second round
will then perform before a selected panel of judges to determine the finalists who will compete for the "Grand Champion of the World" category titles, and ultimately, the "Grand Champion Performer of the World" titles.

Competitors are encouraged to look for sponsors from their respective countries who will pay for their registration fee, airfare, food and accommodation at WCOPA from July 28 to Aug 5. Expected expenditure would sum up to around $3,000 per delegate. Over 50 countries are expected to send their representatives to WCOPA.

"Team Philippines this year is carefully selected and made up of incredible talents from major TV networks and nationwide singing competitions. We are also sending our very first male model delegate to WCOPA," says Carlo.

Griff O' Neal, former "Miss Universe" pageant executive and WCOPA president, shares the same excitement over Team Philippines. "All of us are anxious to welcome Team Philippines to the 11th annual WCOPA! "Go for the Gold!" says O' Neal.

For inquiries and donations to 2007 WCOPA Team Philippines, you may contact Oliver Oliveros of STAGES at mobile no. 0928-7725254 or e-mail address: stages_pr@i-manila.com.ph.