Open Mic: The Megastar and Mega-Miel! 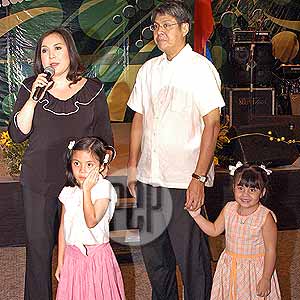 Sharon Cuneta and Kiko Pangilinan's children Frankie and Miel (far right) have both worked with Mike Villegas for separate burger chain commercials. On both occasions, the music composer was delighted to work with such talented kids.

Hello PEP reader! Before I run myself ragged trying to find tickets to the new Transformers movie (it's coming out a day from now), let me fill you in on another awesome recording gig I had just recently. Once again, it involves the Megastar, Sharon Cuneta, and one of her younger daughters—only this time instead of Frankie (who wowed me with her singing prowess in a previous project I've written about here), it was Sharon's youngest angel Miel who shared the limelight in a high profile ad campaign!

Our loyal PEP readers probably remember one of my blog entries from previous months detailing my delightful experience in working with 6-year-old Frankie and her mom on a hamburger chain commercial. A few weeks ago, I got the call to co-write another song for the brand, and what a timely theme it had for me. If you haven't heard the jingle, it asks every parent's biggest questions: Am I raising my child right? Am I teaching him or her the right things? Am I hammering the right ideals home, or am I pushing too hard? An insightful theme to be sure, but it was all the more thought-provoking for me, as me and my wife, singer Bayang Barrios, have recently been blessed with a bouncing baby girl, Mayumi! So when I sat down to write the music for the project, I had Miel and Mayumi in mind at the same time. How cool is that?

Now back to the story! This time around, the singing was done by the ever-professional Sharon, and not one of her ever-professional kids. Baby Miel's only line in the whole ad was an infinitely cute "Mommy" during one of the stanzas in the full song version. This, however, was the most fun part of the recording, as we had a ball asking the little girl to call her mom through several degrees of lambing and inis. The out-takes alone would've made for a great video! We recorded Miel first, while her energy was at its apex. Then it was Mega's turn, and it was the start of another easy half-hour for me. As I've mentioned previously, Sharon is an absolute perfectionist in the recording studio. But the beauty of her professionalism is that she's an absolute perfectionist but not at the expense of the sanity of the engineer and/or producer. Instead of tiring each other out learning the song as we went along, Sharon made it a point to learn very word, every note, every nuance by heart, before she took a step inside the booth. That way, we were able to focus on the delivery of the best possible performance, from the first take. To see such love and care done to my work is the penultimate compliment; that it should come from the Megastar made it all the more special!

Thirty minutes later, we were pretty much done except for a few arrangement revisions that I could address when Sharon and her Miel had left for home. I thanked Mega profusely for yet another extraordinary recording experience, and wished them well in their upcoming endeavors. I also thanked the Advertising Agency (DDB) for letting me work on such a timely song in my life as a new father. Realizing that I'm completely responsible for someone else's well being was at first the most frightening thing I had ever felt. Seeing my child smile and realizing that she is completely responsible for my wellbeing, makes this the happiest I've ever been in my life!

Be well, everybody, and God bless!