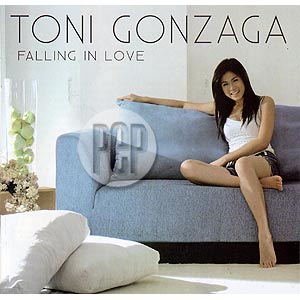 Singer-TV host Toni Gonzaga admits that at age 23, she's now ready to seriously fall in love. She has just released her 11-track sophomore album called Falling in Love. According to her, "Paul [Soriano, the director of the single] is someone na hindi mahirap magustuhan."

"I think I have to fall [in love] na kasi I'm twenty-three na," said Toni Gonzaga when asked about the current state of her love life during the June 28 press conference for her second album, Falling In Love, at the 9501 Restaurant in ABS-CBN.

Now that Pinoy Big Brother has come to an end, Toni will take a rest from hosting to focus on the promotion on her newest album, which has been a topic of intrigue by showbiz reporters because of its carrier single, "Catch Me I'm Falling."

Although she did not directly answer why she thinks that "Catch Me I'm Falling" best describes her emotional state, some reporters guess it has something to do with the director of its music video, Paul Soriano.

There have been rumors that the director is courting her and this became apparent during the shoot of the music video. "I was really pampered during the shoot. Talagang akala ko may franchise ng 7-11 [a convenience store], nakahilera [ang mga pagkain]. Talagang effort talaga," narrates Toni.

Toni admits that it's not hard to fall in love with her director. "Well, Direk Paul naman is someone na hindi mahirap magustuhan. I also admire his faith with the Lord, he's also a Christian. He's very down-to-earth, his passion sa trabaho niya, he's very dedicated."

The singer-TV host also adds how grateful she is to work with the noted director in her music video. In fact, Toni describes Paul as, "Parang I could say na he's a very promising director, he's a very good director, and talagang 'yong mga vision niya when it comes to music videos, directing, talagang kakakaiba. I really look up to him."

ALBUM PROMOTION. Toni regrets that she didn't have enough time for the promotion of her debut album You Complete Me two years ago. So now she is making sure that she dedicates more time in promoting her second album.

With her 11-track album, according to Toni, the listeners will experience love. "They will experience how beautiful it is falling in love, how wonderful life is if you're in love.

She adds, "This second album is really a compilation that talks about my emotions, me being in love."

Falling In Love not only includes the theme song of the Koreanovela Which Star Are You From?, "Catch Me I'm Falling," there are also other soulful tracks that will inspire the listeners to experience love like no other. One of these songs is Jamie Rivera's "I've Fallen For You," which will be the theme song of the upcoming movie of Kim Chiu and Gerald Anderson.

Another is Toni's personal favorite "Kasalanan Ko Ba?," which is an original of Neocolors. "I just fell in love with the mellow [sound], with the lyrics of the song. It sounds so desperate and very hopeful. So I really wanna make a version of it, that's why I suggested it to Star Records," explains Toni.

Also included in the album is "Perfect World" that was made the theme of the computer game Perfect World by Level Up, the maker of the popular online gaming Ragnarok. And, of course, Toni's very own composition entitled "You're My Right Kind of Wrong."

As part of promotions, Toni will go on several mall tours. "This is actually what I really want to do, to go everywhere to promote the album. Kasi I didn't have that much time during my first album. I haven't been able to go to Davao, to Cebu. This time we really make sure that I'll really be going around. I'll probably be going everywhere just to promote the album," says Toni.