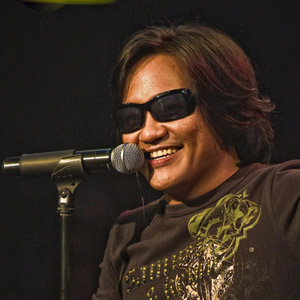 "I have a band for twelve years. I gave up everything for chance to have a day job, chance to start a family immediately. I was convinced na 'yon ang kailangan kong gawin. So yung nawala siya, nakakadiskaril. I felt lost for a while—it was harder than I expected," admitted Ebe Dancel about leaving Sugarfree to become a solo artist.

Embarking on a solo career was not part of Ebe Dancel's immediate plan. The singer-songwriter, however, was convinced that leaving Sugarfree—the band he fronted and steered to mainstream success for 12 years—was the right thing to do considering his diminishing drive to continue playing with the group.

Ebe's scheme sounded simple: walk away from the hit-making band and work quietly behind the scene perhaps penning songs for other artists and producing records—or even embark on a different career altogether for a change.

But Warner Music Philippines came up with a proposal for Ebe to once again come up with an album, but this time as a solo artist.

The offer came at the time when the former Sugarfree singer—who was responsible for the hit songs "Burnout," "Mariposa," "Tulog Na," "Hari Ng Sablay," "Kwarto," and "Kung Ayaw Mo Na Sa Akin," among others—had no spare materials left in his arsenal.

"I have no songs," Ebe recalled telling a label representative, who replied coolly, "You'll write the songs."

WORKING WITH FRIENDS. Ebe remembered going home from that meeting to "regroup" and start the painstaking work of writing new songs.

"Before I know it I was calling [Warner's in-house producer] Neil Gregorio to set up some studio time, and then fortunately all of the musicians that I asked to play with me, did play with me," narrated Ebe at the listening party held last July 13 at Red Box, Eastwood Mall in Libis, Quezon City.

SURGE OF INSPIRATION. The fun and dorm-like atmosphere inside the studio was the complete opposite of the process experienced by Ebe while writing the songs.

"I have a band for twelve years. I gave up everything for a chance to have a day job, chance to start a family immediately. I was convinced na 'yon ang kailangan kong gawin. So yung nawala siya, nakakadiskaril. I felt lost for a while—it was harder than I expected," he admitted.

"I was talking to a good friend Diego Castillo [Sandwich guitarist], days before I left the band, sabi niya 'Kumusta ka?' 'I'm good! I'm having a blast doing the farewell tour. Marami pala ang nagmamahal sa banda. This is the way I want to go.'

Starting from scratch and with no Jal Taguibao and Kaka Quisimbing around to consult with, Ebe discovered a plethora of feelings ranging from pain, nostalgia, joy, and even self-doubt—all these emotions contributed greatly to shape the mood and message of the songs.

The entire process of composing and churning out melodies for the solo record was liberating, therapeutic, and it made Ebe discover the pure joy of writing without the pressure of pleasing other people.

Ebe has always been known to write straightforward sentimental songs. But considering the present situation of working alone, while at the same time trying to move forward from the past, it is reasonable to assume that the new songs are more personal and probably autobiographical.

By the time studio time was around the corner, Ebe had written enough songs worthy of a full-length recording project.

"It's different when you do things by yourself. Kasi iba dati nung nasa banda, you always know that you have their back. Now, for the most part, kailangan mo lang mag-rely sa sarili mo. It made me a better person—marami akong natutunan," Ebe reflected seriously.

At the end of the press conference, Ebe excitedly strapped an acoustic guitar and played "Muli" and "Paalam Kahapon" before the invited guests who gathered at the small videoke space turned function room.

Ebe Dancel is thrilled to be back... and starting all over again.