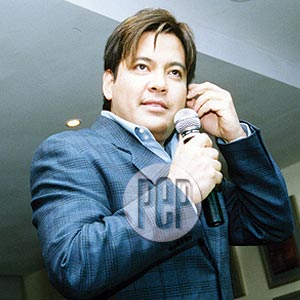 Concert King Martin Nievera warns other Filipino performers not to sign any contract with his former producer. He says, "His name is Gene Gamalinda, stay away from him."

For the first time, Concert King Martin Nievera comes back to the Philippines with his new family—Katrina Ojeda and baby Santino—in time for his 25th anniversary in showbiz, which was on July 5.

"I wanted to make sure I was in the Philippines, in Philippine soil, on the fifth of July yung talagang anniversary ko. So I made it," said Martin in a taped interview with The Buzz, which got exclusive footage of his arrival at the airport last Thursday, July 5.

During his live guesting in The Buzz, Boy Abunda and Ruffa Gutierrez noticed Martin holding a piece of paper containing a poem which was composed by the Concert King.

"It's because of my 25th anniversary I wanted to be [here] on the day of my anniversary. I was here at 4:20 in the morning on July 5th. I wanna thank everybody and I don't wanna forget anything so I wrote a poem while in the car," explained Martin.

In the said poem, Martin thanked everybody that became of his journey in showbiz. Among the people whom he expressed gratitude were his parents, Bert Nievera and Conchita Razon, his former wife Pops Fernandez and their kids—Robin and Ram—and his current wife Katrina and their son, Santino.

MARTIN AND HIS PRODUCER. After reading his poem, Martin was not able to avoid the question about his unfortunate fate concerning his runaway producer in the U.S.

He immediately responded, "It's not yet ayos but I'm trying to move on."

When asked to give the name of his former producer, Martin answered, "Before I wasn't saying his name because Filipino siya, Pinoy. I don't want to think Filipinos fool Filipinos but they do. I was trying so hard to keep his name out of the picture but his name is Gene Gamalinda, he lives in San Diego."

He also added, "I'm only saying this now because his coming out with really awful rumors about me para ma-save 'yong reputation niya. But in doing that, he's trying to ruin mine.

"After already not paying me, after already running away from my production, and making me pay all of his debts. Yung parang [adding] insult to injury, what he's doing."

Martin then gave a warning to other Filipino performers in America by saying, "His name is Gene Gamalinda, stay away from him."

And his message to his runaway producer, "Gene, if you're watching, this is not a bashing of Gene Gamalinda. I just want the other people to get hurt from some of the foolish things that we sometimes do.

"I'm sure one day we can be friends again, we can laugh at this—I hope. Pero maraming-maraming galit kay Gene ngayon."