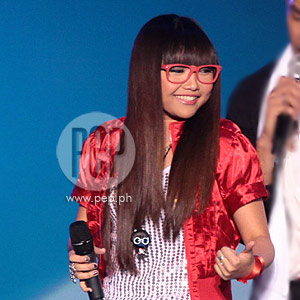 Charice's upbeat song titled "Louder" was chosen to be the background music of the teaser plug for the Oprah Winfrey Network.

The 30-second teaser of the Oprah Winfrey Network (OWN) features a voice that is very familiar to Filipinos.

Charice's upbeat song titled "Louder" was chosen to be the background music of the teaser plug for OWN's shows opening this October.

In OWN's official website, is this description of the teaser: "A whole new season of OWN starts this October, and it's going to be big! Check out this sizzling teaser featuring Oprah, Rosie, Lisa Ling and Will.i.am among the many familiar faces coming to OWN this fall!"

Since joy, feeling, love, creativity, inspiration and family are the themes being tackled by the Oprah Winfrey Network, it seems fitting to choose Charice's song "Louder" with lyrics that go:


This prompted Charice to post on her Twitter account: "Arjohn, next time I do my own show in the Philippines, I would love for you to come and perform with me."


Arjohn, who hails from Mabalacat, Pampanga, was previously featured in GMA-7 shows such as Kapuso Mo Jessica Soho, Unang Hirit, and Wish Ko Lang in 2009.


(CLICK HERE to view a video of Arjohn's performance)


This 2011, the young boy is getting another chance at stardom through various appearances on ABS-CBN.


Last August 14, he was a guest on Gandang Gabi Vice where he performed songs such as Justin's "Baby", Bruno Mars' "Just The Way You Are" and Bugoy Drilon's "Paano Na Kaya?" His guesting allowed him to become one of the top Trending Topics on Twitter.


Last Saturday, August 20, the young boy was one of the guests of ABS-CBN's noontime show, Happy Yipee Yehey. In this episode, he mentioned that he will be a part of Charice's upcoming concert.


However, Charice's manager clarifies that as of today, Arjohn Gilbert is not part of the lineup of the David Foster and Friends concertthat will take place on October 25 at the Araneta Coliseum.