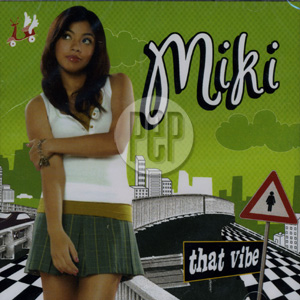 18-year-old singer Mikaela "Miki" Hahn points out that her self-titled debut album goes beyond the young market. "Everyone can relate to the songs," she says during her album launch last June 28 at Teatrino in Greenhills, San Juan.

Coming from a prestigious all-girls school that has a reputation for frowning on show business, 18-year-old Mikaela "Miki" Hahn admitted pulling all the stops to convince the conservative nuns of St. Paul College, Pasig, to allow her to realize her dream of becoming a pop singer.

"I really showed them the contract for them to see its content," she reveals during an interview with Philippine Entertainment Portal (PEP) at Teatrino in Greenhills, San Juan, last June 28.

Although, this move was not even necessary considering that she was already in her senior year when she started recording songs that would comprise her self-titled debut album under Viva Records.

"When I was recording I was still in school but I already graduated when the entire album was done so it was timely din," she recalls.

In a time of talent shows and singing contests, Miki's foray into mainstream entertainment can be considered as old fashion and unconventional.

"I never joined any TV singing contests," she sheepishly admits. "It's not because I have something against it. Hindi ko lang talaga naisip sumali and I guess I'm a bit shy with the thought of joining one."

But it doesn't mean that she gained everything overnight. Miki started singing at the tender age of nine and since then all her activities revolved around music.

"I've been an active member of the Glee Club throughout high school while simultaneously taking music lessons at UP [University of the Philippines] and the Ryan Cayabyab Music School."

She also had formal lessons under the strict yet gentle guidance of Myrna Cruz and Annie Quintos—both from the vocal group, The Company.

Her credentials as a live performer are also impressive, counting top bar joints around the metropolis such as Streetscape, Dish, Bagaberde and Chef and Brewer's, among other places where she usually performs.

Miki's eponymous debut album Miki, titled after her nickname, consists of songs that she personally chose along with her producers.

"Obviously my market caters to the young listeners but everyone can relate to the songs or, at least, pick one or two [songs] which they can relate to," explains Miki, stressing how diverse the materials are in her album.

Keith Martin collaborated with Marcus Davis and came up with the song "Oh Baby," which is considered as one of the strongest tracks in her album.

Other songs included are "Ugly Girl," "Should I," "If," "Here With You," "Kahit Paminsan Minsan Lang," "Kahit Sandali," "That Vibe," and remakes of popular OPM singles, "I Need You Back" and "You Won't See Me Crying."