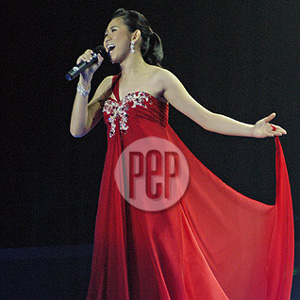 Sarah Geronimo refers to her second major concert as "a way to say thank you for all the support." Sarah Geronimo in Motion was held last Saturday, July 14, at the Araneta Coliseum.

A few days before celebrating her 19th birthday, Pop Princess Sarah Geronimo made sure to fill up the Araneta Coliseum to say thank you to all her fans, supporters and loved ones who stood behind her throughout her young career.

Sarah's second major concert titled Sarah Geronimo in Motion was held last Saturday, July 14, and once again affirmed why the Star For A Night alumnus is considered as one of the most bankable young singers of her generation.

With a sexy dance number for its opening act, the concert made true its promise of showing Sarah at the threshold of becoming a woman. Donning a silver futuristic outfit, the pop singer shone in her performance of a sexy Beyonce Knowles ditty.

Sarah then did a medley of her past hits notably her winning piece, "To Love You More," which was met with great applause and nostalgia. The decision to slice her old hits into a medley instead of doing a full number was perhaps in line with the producer's desire to unveil a new chapter in Sarah's career and to break the predictability of the event since many were expecting to hear the familiar tunes during the show's finale.

Actor-singer Jericho Rosales graced the event and did three rocking tunes—"Manila," Jeans' "Tuwing Nakikita Ka," and the funky OPM classic "Yugyugan Na." Incidentally, Echo is Sarah's leading man in the upcoming soap opera, Pangarap Na Bituin. Sarah joined Echo for a duet of the soap's official theme song while clips of the series were shown through a giant TV screen situated at the top of the stage.

The evening, of course, wouldn't be complete without Sarah's longtime singing and onscreen partner, Mark Bautista. After singing a duet of the Neocolors' hit "Kasalanan Ba?" Mark sincerely congratulated Sarah and thanked her for all the wonderful memories they shared. It is quite noticeable that fans have come to accept the fact that there's no budding romance between the two. The reception received by the pair that evening wasn't as thunderous compared to Sarah's first major concert although everyone found it cute when Mark complimented Sarah for being "sexy."

Sam Milby, who jumpstarted his segment in the program by singing "Maging Sino Ka Man," engaged Sarah in a rock n' roll duel as they took turns singing two Jon Bon Jovi gems—"Always" and "I'll Be There For You." Later on, Sam made a speech where he mentioned that Sarah's character is very Filipina and that she's the perfect example of the "ideal girl," prompting a loud cheer from the audience.

Sarah then tried her hand in singing a couple of Louie Ocampo tunes, which she passed with flying colors. The Pop Princess made a wonderful rendition of the tearjerker "Tell Me" and "You Are My Song," among other Ocampo originals.

Offering comic relief was comedienne Ai-Ai delas Alas who wittingly combined modern youthful tunes with standard karaoke staples. The performance combined with Ai-Ai's hilarious dance moves brought the house down and put everyone in stitches especially when she reprimanded Sarah's off-timing in one of their numbers. Ai-Ai's presence definitely added color to the entire celebration.

Not to be outdone by her guest John Prats, Sarah gave her best shot in performing ala Michael Jackson in a quick-paced dance number that left everyone breathless. However, she did leave enough energy to match her next guest, Gary Valenciano.

Mr. Pure Energy sang and danced with Sarah to the tune of Justin Timberlake's first solo hit, "Like I Love You." Gary later on commended Sarah for her talent and a wonderful concert before settling down to sing a new and beautiful ballad that talks about undying love.

A couple of solo spot numbers saw Sarah singing a poignant rendition of "Bituing Walang Ningning," which is also the same title of the movie-turned-teleserye she starred in. Throughout the show, Sarah couldn't help but recall how she started out as someone who only wanted to sing but eventually achieved all her dreams. She basked in the gratitude of all her well wishers while singing "Forever's Not Enough," another well-loved hit of hers.

Returning for an encore, Sarah opted to end the night in an upbeat manner via Gwen Stefani's "Sweet Escape" and punk rocker chick Avril Lavigne's "Girlfriend" as bundles and bundles of flowers from supporters, sponsors and fans kept on flooding the stage.