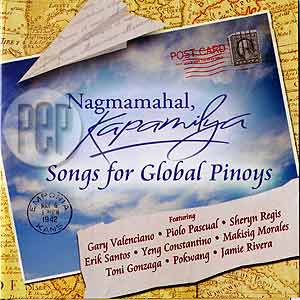 The Nagmamahal Kapamilya Album - Songs For Global Pinoys uses music to touch the hearts of Filipinos, especially those who are working abroad to help their families. This 14-track album is released by Star Records.

In celebration of Nagmamahal, Kapamilya's first anniversary, Star Records releases a 14-track album for Filipinos abroad. The Nagmamahal Kapamilya Album - Songs For Global Pinoys is a compilation of songs that will make every global Pinoy feel closer to home.

Through this album, Nagmamahal Kapamilya hopes to pay tribute to the sacrifices of our modern-day heroes, the overseas Filipino workers (OFWs), and their great contribution to the country. The album will be available through ABS-CBN's online shopping center, Starry Starry Store, for The Filipino Channel subscribers.

Star Records artists Erik Santos, Toni Gonzaga, Vhong Navarro, and Pokwang entertained the showbiz press during the July 19 press conference for Nagmamahal, Kapamilya's first anniversary. These four singers were included among the artists who sang for the album.

Annabel Regalado-Borja, one of the executive producers of the Nagmamahal Kapamilya Album - Songs For Global Pinoys, said that they carefully chose the artists included in the compilation. She says, "Kinukuha namin ang mga artist na may relevance o affiliation sa product na ilalabas."

Erik Santos, for instance, was chosen because his father worked as an OFW in the past. The singer recalls, "Habang nire-record ko iyon [his song "Balik Sa Bayan"], feel na feel ko ang pag-awit." Incidentally, Erik's piece will be used as the new theme song of the upcoming campaign of ABS-CBN show Nagmamahal, Kapamilya.

Another singer who can relate to the songs in the album is comedienne Pokwang, who worked in Japan and had two sons from her former Japanese partner. While she was doing the song "Hai," Pokwang admitted that, "Yung bawat lyrics po ng kantang inawit ko nakaka-relate naman po ako diyan kasi po istorya ng buhay ko iyon.

The month-long celebration of Nagmamahal, Kapamilya will kick off on August 4. The episode will feature an exclusive interview with Superstar Nora Aunor in San Diego, California; the love story of Marianie de Villa; and the life story of Pinoy Big Brother Season 2 Big Winner Beatriz Saw.