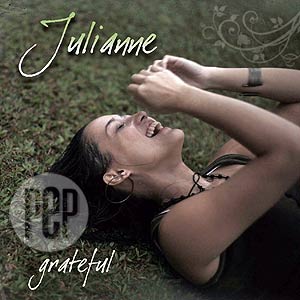 Hello, loyal PEP (Philippine Entertainment Portal) readers! Here begins a new feature in Open Mic, the occasional album review. It's a win-win for me, as I get to hear what's new out there (forcing me out of the rut my iPod has made for me), and I get paid an extra million pesos by my already gracious bosses here at PEP (one can hope, right?). A few notes before we start, o loyal reader:

I'll be reviewing the songs in chronological order as they appear on the CD.

I won't waste my time, or yours, in reviewing a clunker. If I write about a song, I most probably liked it enough to grace, or litter, the precious memory banks of PEP's online servers.

Tulak Ng Bibig. This was the first single off the album, and what a great choice to kick off public awareness of this prodigious new talent. Julianne's stark powerful vocals show off another of her greatest strengths—this young woman plays a mean rhythm guitar! Her fresh voice carries the relaxing melody very well, without the effected and contrived stylings that modern "R&B" singers seem to espouse these days. That said, wonderful lines, such as "Pasensya ka na lang, hanggang dito na lang tayo," don't seem supported by the otherwise groovy arrangement, and the idea of the song gets lost in the shuffle. Still, a fantastic song, and wonderful playing by the musicians!

Grateful. Virtuoso guitar playing by an immensely talented young artist peppers this great title track! My favorite song on this CD, "Grateful," hypnotizes with a lilt that takes you places in your head—a hallmark of all great songs—and you can't help but bask in the uplifting joy she obviously felt while singing this. "Grateful for the day you called my name"... I love it when songs say "I love you" in creative ways, rather than blurting it out!

Choose To Believe. "The promise of serenity" is fulfilled in me by this "Gospel" song. This is praise the way I like it, espousing Him and His truth without bludgeoning you with the usual tired clichés. A true celebration of belief in a higher power, the song has a more modern accompaniment that is never overbearing. Think Paul Simon's album Surprise, with the synths and strings that help the song along without getting in the way. I'm a believer!

Queen In Me. Another shining example of Pinoy musicianship! The band turns it up on this one, and Julianne has a ball grooving her strong melodic refrains into the pocket they've prepared! "The Queen In Me" pays homage to the organic live vibe of Joss Stone and Macy Gray; a nod to a time when R&B meant "Rhythm and Blues", and was synonymous with such groovemasters as the Motown band, the Stax horns, and Aretha—NOT the overkill vocal calisthenics of Aguilera and Mariah Carey. Sweet!

Let It Rain. A freewheeling ode to the abandon she feels (both negative and positive) in the midst of a deluge, this song starts off with her great guitars and a rainstick, and takes you through "The thunder and the lightning" of her fears and hopes, stanza by beautiful stanza!

Unsaid. This song is a bit bizarre for me, as it shows the polar opposites of the album's qualities: This song, I believe, has Julianne's best singing, and yet it's the "least strong" number on the CD. (Pardon my description, but I just couldn't get myself to describe any song as "weakest" on an album this good!) The bassist (or was it the bass programming?) should have been much tighter, and the track suffers from the absence of Julianne's best accompaniment: her rock-steady guitar playing. It's very hard to groove to something when it simply won't let you, but it's to her credit that her singing is simply stellar in spite of this drawback.

Healing. Her propulsive guitar is back, and so is Julianne's groove on this track! For me, "Healing" is her strongest upbeat song on the CD, with its empowering tribute to her strengths and inspirations. Check out the line, "Exclude me from this selfish game you play"—haven't we all wanted to say that offhandedly to some loser in our lives? And she does it in the most matter-of-fact kick-ass fashion that you can't help but grin and tip an imaginary top-hat to her wit!

Empty Chairs. Piano, flute and hypnotic guitars underscore the "moments" she illustrates in this beautiful, beautiful song. "All I see are empty chairs I have to fill"—what an awesome way to look at relationships and breaking up. The great lyrics perfectly capture (for me, at least), the cyclical nature of this game we love to kill ourselves playing. The refrain is perhaps one line too long, but that's a minor gripe to this otherwise untarnished treasure.

Thank You. The liner notes pay credit to producer Mike Luis, who's at the helm of this project, and his genius can be best heard (or should I say unsung!) on this final cut. The stark, clean arrangement that let a song breathe, the tight unpredictable vocal harmonies that lift the listener without bombast or the frequent crime of overproduction. (Of course, with a first name like Mike, how could Julianne go wrong?!)

OVERVIEW AND AFTERTHOUGHTS. It took so long to write this review and I have a cop-out, I mean, a valid reason. It takes so long to make an album. The songwriting, the arranging, the rehearsing, the actual recording, mixing and mastering—not to mention the photo shoots and layout sessions. A nucleus of maybe three to ten people might have given difficult birth to a CD, and months or years might have been spent nurturing it, and watching over its gestation. I simply wanted their vision (in this case, Julianne's) to have an opportunity to grow on me if it wasn't altogether easily realized by this listener. Congratulations then, to Julianne and her production team and musicians, because Grateful is easily one of the best albums, local or otherwise, to have been produced all year! Four Stars!