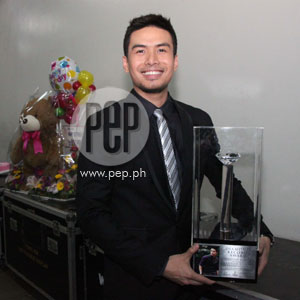 "It's the best Christmas gift that I've ever had."

Christian Bautista, balladeer and actor, has much to be grateful for. If anything, he is reaping what he sowed.

This 2011, Christian had a remarkable journey highlighted by an album comprised of international collaborations with other artists and producers from Japan, Indonesia, and Singapore to name a few. The romantic balladeer also had a chance to showcase his singing and acting skills in the musical-drama television series The Kitchen Musical, which was shot in Singapore.

To cap the year, Christian was awarded last December 2, Friday, a Diamond Record award for his special album, A Wonderful Christmas. The 15-track album was released last year in a marketing-tie up with the donut giant franchise Dunkin Donuts. Since then, 200,000 copies of the album have been sold.

Achieving the top sales for an album is quite rare these days as OPM artists (Original Pilipino Music) fight against piracy continues—this the balladeer is fully aware of.

The hardbound-packaged A Wonderful Christmas album contains 15 tracks of holiday songs from the timeless "chestnuts roasting on an open fire," or "The Christmas Song," to the pop-ish classic "Last Christmas." The album likewise includes an original Yuletide single by Christian himself, "Christmas Time," and the Tagalog Christmas ballad, "Nakaraang Pasko."

As the singer plans to wrap up the year by spending quality time with his family in hometown Cavite, Christian mentions that the early part of his 2012 promises a good start.

2011 has witnessed Christian prove his appeal in other Asian countries, especially in Indonesia where he is seen as a pop idol.

Being cast in The Kitchen Musical together with Filipino artists Karylle, Thou Reyes, and other Asian singer-actors has honed Christian as a performer, pushing him to be an even better balladeer, and a competent dancer. The classy, Singapore- based production has likewise established Christian's popularity in the Asian showbiz circuit.

Asked if being a hit abroad more than making it big in his own country at present discourages him, Christian replies, "A few years ago I was very sad about it. Pero ngayon, parang na-realize ko, maybe this is my path, e.

"If this is my path, I just got to embrace it and do what I can to fulfill it.

"Hindi ko naman kino-compare yung sarili ko but for example Martin [Nievera] and Lea [Salonga], sometimes they have more shows in a year outside than in the country. Maybe parang ganun din ako."

Will he be concentrating more on his international projects?

"Yes. Konti lang nabibigyan ng opportunity. Not just an opportunity but a vehicle and a machinery to do it.

"So my foot is there, might as well put my whole body in it."

Although he wants to concentrate on his projects abroad, Christian rejects the idea of leaving the country for good.

He explains, "The way that we do it, [an arist has] to really work hard dito sa bansa mo, sa homebase, para pag nag-international ka na, meron kang masasabi about your album."

On a final note, the singers dubbed as an Asiansation, remarks that he can only be grateful to each and every blessing that has come his way.

"Thank you, God! I'm just thankful to God for giving me all this, sometimes, undeserved, sometimes deserved. Pero it's great.

"Hopefully I can still be an inspiration, be a role model somehow. Help my friends, help my family."