DZMM celebrates silver anniversary; gives back to fans with a festive concert at the Big Dome 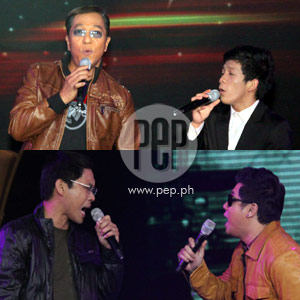 Avid radio listeners were treated to a night of fun and festivities as their favorite DZMM commentators and DJs let loose in a rare night of music and dancing.

With Christmas just around the corner, radio personalities such as Nina Corpuz, Jasmin Romero, Kaye Dacer, Bernadette Sembrano, May Ceniza, Ruby Tayag, and Dra. Luisa sang much-loved Filipino Christmas songs such as "Nakaraang Pasko" and "Miss Kita Kung Christmas" with ASAP's male crooners such as Christian Bautista, Jed Madela, and Guji Lorenzana. Also serenading the crowd with carols are radio personalities like Carl Balita, Akiko, DJ Richard, Alex Santos, Monica, and Vic Lima who sang their own heartfelt renditions of "Last Christmas," "All I want for Christmas," and "Santa, can you hear me?"

DZMM's traffic angels together with Sports Talk host Gretchen Fullido had a dance showdown with the energetic Gab Valenciano of ASAP Rocks. They all danced to a medley of LMFAO's "Party Rock Anthem," Katy Perry's "Firework," and Neyo & Pitbull's "Give me Everything Tonight." Gab's father, the one and only Mr. Pure Energy, Gary Valenciano was also a special guest in the concert. Araneta erupted into cheers as he sang his popular teleserye theme songs such as "Tayong Dalawa," "Kung Tayo's Magkakalayo" and "Minsan Lang Kitang Iibigin."

Adding to the star-studded guest list is Star Power grand champion Angeline Quinto who sang her hits like "Saan Darating ang Umaga," and "Umaga." Other female singers who dropped by include Kitchen Musical's Karylle, and Pinoy Dream Academy's Laarni Lozada and Liezl Garcia.

The highlight of the night however was Ted Failon's showdown with Pilipinas Got Talent Season 1 grand winner Jovit Baldivino. Failon channeled his inner rock star as he belted out hits like "Can't Fight this Feeling," "Open Arms," and "Love Hurts." Failon's supporters brought posters and banners to support the DZMM anchor, much to his delight.

Not to be outdone by Failon are his fellow broadcasters turned 'rock stars' Anthony Taberna and Gerry Baja. Randy Santiago joined the two in a nationalistic OPM segment with hit songs like "Noypi" and "Tatsulok."

Adding humor to the festive and nationalistic numbers was DZMM's very own Gus Abelgas who joined comedians Kiray, Onse, Cacai, Ambet, Ahwel, and Melai Cantiveros in a funny karaoke production number. The crowd sang along classic jukebox classics such as "Basang Basa sa Ulan," "Isang Linggong Pag-ibig," and "Remember Me."

The most important announcement of the night, however, is the comeback of Korina Sanchez to DZMM. ABS-CBN Manila Radio Division Head Peter Musngi did the honors of introducing a short playback video on Korina and her return to DZMM after almost two years of absence. "Dadalhin ko ang Rated K sa DZMM," announced Korina at the SilveRadyo concert.

Another highlight of the concert was DZMM's big boss Peter Musngi's duet with Rachel Alejandro in a touching performance of "The Way You Look Tonight." Sir Peter, dubbed by his peers as the 'Voice of ABS-CBN' definitely proved that his vocal prowess is not limited to just radio broadcasts.

Everyone came together to sing the DZMM theme song with the UP Concert Chorus serving as their backup vocals.