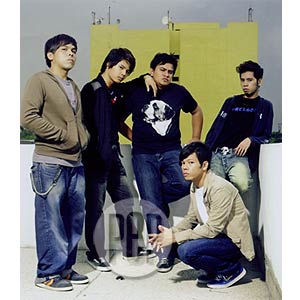 Being funny just comes naturally for the boys of 1017, leaving an indelible mark on their music branded as "Bisrock" or Bisaya rock.

A rock band brandishing a novelty tune isn't entirely new. Think of Parokya ni Edgar and the Jay Contreras's unruly Kamikazee. Even the Eraserheads band was considered a novelty act when they first emerged in 1993 via their irreverent, groundbreaking debut album.

But these are only a few successful names in this genre and despite Pinoys' penchant for humorous tunes, it'is still unsafe ground to traverse, given the changing trends and shifting fads and evolving taste of local audiences.

But that's also not an excuse for new artists to take on the same route like EMI Philippines' latest find, which came all the way from Davao—1017.

The band which was formed in 1998 is composed of Jam-Jam Ruiz (lead vocals and guitar), Mackoy Al-ag (vocals and guitar), Janpoy Fortich (drums), Beam-beam Longakit Jr. (bass and vocals) and Chokoi Pasagui (guitars and vocals). They have always been known in their hometown for their own brand of original rock novelty tunes while dishing out comic relief for their audience.

The band isn't worried that they might be typecast as just a novelty act.

The band's single, interestingly titled "Charing," already had listeners down south in stitches before finding its way to Manila airwaves.

Before coming to Manila, 1017 had already built a reputation and cult following, particularly in Davao. They worked hard in performing for provincial concert tours, campus shows, TV and radio guestings. Most importantly, they did front acts for established Manila bands—Bamboo, Shamrock, Parokya ni Edgar, Sandwich and Up Dharma Down—during their provincial gigs.

The witty lyrics and catchy melody of "Charing" caught the attention of EMI Philippines and signed up the band, paving the way for their eponymous debut album released last month.

Admittedly, the boys of 1017 are not comfortable putting specific genre labels to any kind of music, including theirs, but they hope to bring that fusion of Bisaya-Tagalog brand of alternative music to the majority.


The music video of "Charing" was directed by Treb Monteras, the same guy who is also responsible for Sugarfree's "Tulog Na," Hale's "Shooting Star" and the Bloomfields "Ale."