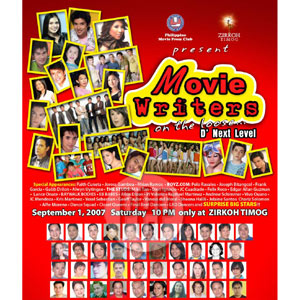 Movie Writers on the Loose—The Next Level will have special appearances by Ms. Maricel Soriano, Faith Cuneta, Joross Gamboa, Rhian Ramos, Rayver Cruz, and the two newest boy bands today—Boyz.com and The Studs.

The Philippine Movie Press Club (PMPC), a group of active entertainment columnists and editors, will hold a special musical variety show titled Movie Writers on the Loose—The Next Level on Saturday, September 1. The show will start at 10 p.m at Zirkoh Comedy Bar in Timog Avenue, Quezon City.

The original Movie Writers on the Loose was highly successful in the ‘80s. It was the writers' time to shine as they performed production numbers on stage, with the controversial "Litanya" about the movie stars. It was held many times at different venues in the past—in Camelot Hotel in 1982, then in the first Star Awards for Movies in 1985 at the Manila Film Center, and at the Rizal Theater, Jaloux Disco, in Quezon City, and at the University of the Philippines in the late ‘80s.

After 25 years, the PMPC is reviving the fun-filled tradition. The new generation of movie writers is out to showcase their "other talents" aside from movie reporting—singing and dancing. It can also be a perfect time for the press to spend "bonding" time with the invited celebrity guests they usually interview and write about.

The show is directed by George Vail Kabristante, the original director of all the past presentations of Movie Writers on the Loose. The show is choreographed by Ian Valdez.