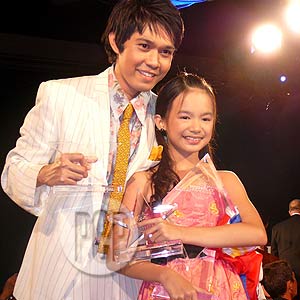 The young singer hurdled three rounds of competition in five vocal categories, which included Broadway, Pop, Latin, Rock and Gospel, to get into the grand finals. As Overall Grand Champion, she bested around 5,000 entries, which included dance, acting and modeling acts, coming from 50 other countries, from Armenia to the United States.

Aria sang an abridged version of "Don't Rain On My Parade" from the musical Funny Girl that also won her the Grand Champion Junior Vocalist of the World award. She competed against four junior vocalists representing South Africa, New Zealand, Trinidad and Tobago, and Russia.

Reymond Sajor, ABC-5's Philippine Idol Season 1 finalist, is another big Pinoy winner in WCOPA. Reymond bagged the Grand Champion Senior Vocalist of the World award with his rendition of the one-minute-long "Anthem" from the musical Chess. He competed with fellow Pinoy singer Raki Vega, and three other vocalists from Haiti and South Africa.

WCOPA is often cited as the "Hollywood Olympics" for performers and entertainers. After 11 years of incredible growth, it has become the only global talent and model competition of its kind staged annually in Hollywood, the entertainment capital of the world. Similar to the Olympics, only invited and qualified competitors (called Worldstars) representing their countries compete each year in a fierce competition for Grand Champion of the World titles.

OPPORTUNITIES ABROAD. All Kids Talent Management Group, based in Los Angeles, has had talks with Aria and Carlo Orosa, WCOPA National Director for the Philippines, regarding representation of the young singer in Hollywood.

Reymond and Raki have had one-on-one meetings with Shelley Sondheim, nephew of famed Broadway composer Stephen Sondheim, regarding opportunities in Hollywood and Broadway.

"Team Philippines to this year's WCOPA has once again proved to the world that our singing talents are exceptional and world-class. Everybody is a winner. Doors have opened for these talents to explore and expand to mainstream Hollywood and Broadway," says Carlo.

Aria and Reymond have been trained in Trumpets Playshop, and endorsing Trumpets Music Academy in the Philippines. Aria will soon star in the Manila debut of the off-Broadway hit musical Children's Letters to God. Reymond is currently working on his debut album.