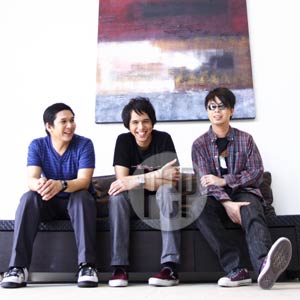 (From left) Mark Escueta, Japs Sergio, and Mike Elgar take on singing and songwriting duties in order to come up with their new 5-song EP Bagong Liwanag. It is released on the band's own label, Revolver Music, and licensed to Warner Music Philippines.

The EP's carrier single, "Sayang," was composed and sang by bassist Japs Sergio. Described as "an open letter to the fans in the song form," the single is also a compelling response to Rico's leaving and a heartfelt reassurance to all Rivermaya supporters that the band and their music will continue.

All songs were written by Mark, Japs, and Mike, and sang by their respective composers. In their last album, Between Stars and Waves (2003), Rico penned three songs, Mike seven, and Japs around five.

Mark Escueta recounted, "Ever since '94, all past members of the band would sing. So this—us singing and writing songs—is not really the first time it's happening."

Another track, "Sumigaw,"(penned by Mark) is the new theme of Studio 23's station ID. The rest of the cuts are "Banda ng Bayan" (Rivermaya's self-proclaimed post-Bamboo moniker), "Olats," and "Nawawala." It took the band three months to write, produce, and record the EP, reflecting the band's renewed commitment to stay true to its music and its fans.

Mark confirmed that all five songs were related to the events that transpired within the band in the last few months. "Like ‘Nawawala,' I wrote it the night na magpapaalam pa lang si Rico," revealed Mike.

On the surface, the EP's turnout is nothing like Rico's stratospheric compositions. "Ever since naman, we really tried to make each song as unique as possible. This time around, 'yung direction namin, mas simple. We wanted mas simpleng mga kanta, parang 'yung feel nung ‘90s Pinoy rock," explained Mark.

"We're going back to the basics," Mike said.

Indeed, a return to their musical roots allowed the band to produce songs that sounded fresh yet evocative, and still stamped with Rivermaya's trademark musical flavor though they had primarily set out to do otherwise. That the songs were born out of the recently concluded splinter in the band only amped the songs' personal appeal.

But in the advent of Bagong Liwanag, the band has taken to dividing singing duties among themselves when performing live. To lighten the load, they sometimes divide one song among themselves. "We still sing old Maya songs, pero nagaagawan pa kami kung anong kakantahin," laughed Mark.

During the time when Bamboo left this band, the OPM community thought Rivermaya would call it a day. It was a big blow, but they managed to get back on their feet. This time around, the journey back to the peak will be just as hard. But if this EP is anything to go by, Rivermaya's friends and impartial bystanders alike would be more than willing to put their money where the band is.

"It's not about us. Through the years, we now acknowledge that the biggest part of Rivermaya was never its members. Rivermaya is and has always been about the fans. Kami nga ang sumusulat, kumakanta, pero kung walang pupunta sa concert, sa show, wala ring kuwenta. Sila ang Rivermaya, sila ang eksena, sila ang OPM. So we're doing all of this for them."

Rivermaya's new EP Bagong Liwanag will hit stores nationwide on August 25. This 5-song EP is released on the band's own label, Revolver Music, and licensed to Warner Music Philippines.