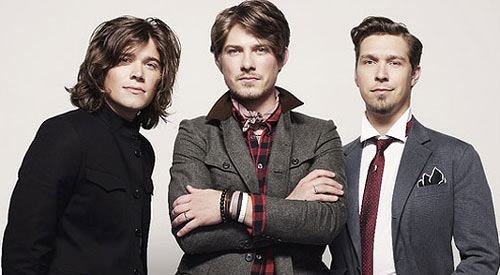 Get ready to welcome American pop-rock band Hanson as they make their much awaited return to Asia. The band returns to the Philippines in March 2012 as part of their Shout It Out World Tour.

Composed of brothers Isaac, Taylor and Zac who hail from Tulsa, Oklahoma, Hanson has been making music together for nearly two decades. In 1997, the release of their first major label album Middle of Nowhere introduced their out-of-the-blue, soul-inspired brand of American pop-rock 'n' roll to the world. The album sold over 10 million copies worldwide and earned the band three Grammy nominations.

The band is best known for their phenomenal hit single MMMBop, which reached No. 1 in 27 countries. Their other hits from the same album include Where's The Love, I Will Come To You and Weird. Snowed In in 1997 and another studio album in 2000, This Time Around, with hit singles This Time Around and If Only before they launched their own independent record company in 2003. Under 3CG Records, they released the album Underneath in 2004 with hit singles Penny & MeLost Without Each Other.

Their independent moves paid off, building a brand that has grown with successful independent albums, singles and tours, during a decade when music sales plummeted. In addition, alongside the launch of their 2007 album The Walk, they championed calls for action on humanitarian efforts, galvanizing tens of thousands of people around the world to participate in barefoot one-mile walks to fight HIV/AIDS and extreme poverty in sub-Saharan Africa. and HANSON released the Christmas album.

On their fifth studio album, Shout It Out, they deliver a powerful group of soulful, melodic tunes that will leave you with a contagious sense of optimism for the future and welcomed reminiscence for American rock 'n' roll.

Shout It Out contains R&B-flavored pop-rock, a homage to the music that inspired Hanson when they started out. The album produced and written exclusively by the band is augmented with special guests: Funk Brothers bassist Bob Babbitt, who played on some of Motown's greatest hits, and horn arranger Jerry Hey, who worked with Michael Jackson, Quincy Jones, Earth, Wind and Fire and many more.

"The anatomy of our band is similar to a '70s rock band--white guys from the Midwest who grew up listening to '50s and '60s soul, who are mixing guitars, with vintage keys and melodic songs," Taylor Hanson says.

Adds Isaac, "We'll always be a bit rootsy 'cause it's in the Oklahoma soil, but what we've never stopped aspiring to is the great songwriters and performers who struck a chord with us first, that early rock and roll and soul music from Chuck Berry to Otis Redding. We've rediscovered that aspiration on this record. There's a little more swing and a little more air."

While Shout It Out looks back in time musically, it also represents forward movement for Hanson. "We love playing classic songs," says Zac Hanson. "But we never sat down and wrote our version of what that sounds like until now."

Shout It Out showcases not only the music of Hanson, but many aspects that have allowed the band to survive and stay relevant. "The album is about being alive, and the contrasts we are faced with," Taylor says. "We've come from a generation leaving the analog world and moving into an interconnected culture at risk of forgetting where it came from. This album tries to put together those pieces, but with a bit of melody to back it up."

Hanson emotes such fresh energy on the new album that it's easy to forget this band has been around the block a few times. The band boasts of multiple Grammy nominations (drummer Zac is the youngest nominated songwriter in history), years of headline shows everywhere from Carnegie Hall to the Hollywood Bowl and world records for the loudest concert audience in history.

For more ticket information and reservations, please log on tohttp://www.ticketnet.com.ph or call Ticketnet at Tel. No. 911-5555.

Hanson Live in Manila and Cebu is presented by DAYLY Entertainment in association with Rockstar Touring and LAMC Productions.