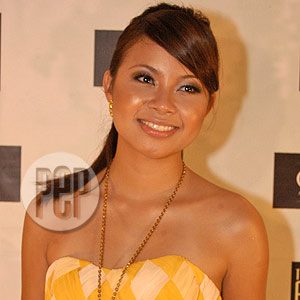 Is bossa nova sensation Sitti Navarro in love with a foreigner?

"Cookie po ‘yun," she laughs heartily when Philippine Entertainment Portal (PEP) asked her about the song she wrote, "A Song for Penny Brown," which is included in her new album Sitti: My Bossa Nova, under Warner Music Philippines.

So, "Who is Penny Brown?" we asked again.

For someone who sings songs in a genre considered romantic and undeniably passionate, having a cookie brand name for an inspiration instead of an actual person sounds a bit funny.

Sitti said that she remains unattached despite a throng of male fans who openly admitted not just liking her style of music but having a huge crush on her as well.

The rumor linking her to actor Victor Neri and with Ysabella co-star and fellow singer Aiza Seguerra is not true she replied instantly.

How about with Aiza Seguerra?

Both Aiza and Sitti are part of ABS-CBN's teleserye Ysabella, and the reason Sitti thinks they're being matched is because most of the scenes require them to be together as they portray band mates.

Sitti would rather go for someone who is outside showbiz circles. She's more attracted to low profile guys or as those who are, "boys next door" type. "Low profile. Hindi showbiz. Ayoko ng showbiz (guy) parang ang gulo-gulo kasi."

She now enjoys acting, most especially hosting, and hopes to pursue it further given the right opportunity. Sitti and Asia Agcaoili used to host the Pinoy Big Brother segment on Studio 23.