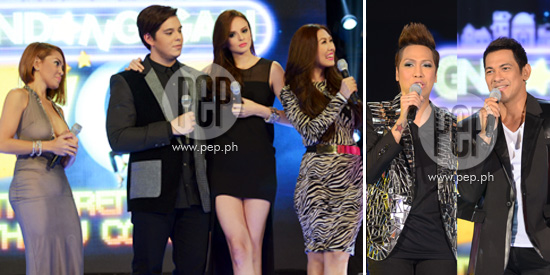 "I'm beautiful in my way 'cause God makes no mistakes..."

As part of a dynamic repertoire, Vice Ganda sang Lady Gaga's hit single "Born This Way" at the taping of a special episode for his Sunday primetime show, Gandang Gabi, Vice! One of the country's hottest comedians today, Vice Ganda's unapologetic and infectious humor aptly manifests in the lyrics.

Vice Ganda, a.k.a. Jose Marie Viceral, turns 36 years old this Saturday, March 31, and what better way to celebrate— at full blast—his irrefutable wit and talent than through a birthday concert?

The host-comedian-actor's birthday episode, "The Trending Birthday Concert," was shot in advance at the Skydome SM North EDSA, last Sunday, March 25, in front of a live audience that went wild at Vice's every punch line.

As known actors, media personalities, and performers are featured in his show weekly, Vice's birthday concert was made even more remarkable by an all-out-effort appearance by his closest friends from the entertainment industry—even if it meant for them to be subjected to Vice's comical demeaning!

Among the segments to watch for in this episode are Xian and Kean's number wherein they "fight" over who gives the better birthday gift to Vice; Aegis's mesmerizing performance of Nicki Minaj's "Super Bass" sang some 7 octaves higher; Ethel Booba's side-splitting comic act; likewise Gary V.'s "moving" song act where the respected OPM artist is challenged to sing the theme songs of Goin' Bulilit, Matanglawin, and Wako-Wako.

Vice Ganda's birthday concert will be seen during the April 1 episode of Gandang Gabi, Vice! which airs after Pinoy Big Brother Unlimited on ABS-CBN.