Who among Biggel, Pamu, Paco, and Slater will win Pinoy Big Brother Unlimited? 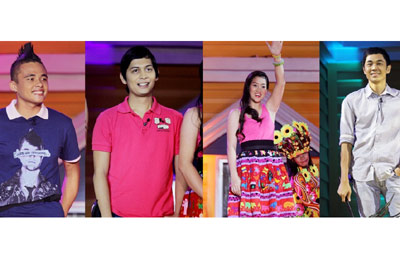 (From left) Biggel, Paco, Pamu and Slater emerged as the Big Four of Pinoy Big Brother Unlimited. The Big Night will take place this Saturday at the Quirino Grandstand.

After five months of surprises, drama, and twists and 29 housemates evicted from the Big Brother house, the Big Four housemates of Pinoy Big Brother Unlimited will come together at the “PBB Unlimited: Big Night at the Grandstand” to celebrate Pinoy pride and talent this Saturday (March 31) at the Quirino Grandstand.

With Divine’s eviction three nights before the finale, Biggel, Pamu, Paco, and Slater were announced as the Big Four housemates who garnered the highest percentages of votes in the other night’s one-hour poll. One of them will be declared as the reality show’s latest Big Winner.

The youngest in the Big Four cast is Biggel, the “Promdihirang Tisoy of Marinduque,” who was raised in a farm by his grandparents. The housemates have often remarked on his immaturity, but he has shown his eagerness to reach for his dreams and the scholarship he had longed for.

Similar to Biggel, 20-year old Pamu grew up in a modest household. Tagged as the bold and cheerful “Kitikiti Kid of Batangas,” she proved herself when she stood up against the oppressive Don and Donya and expressed her feelings for ex-housemate Kevin.

Paco, on the other hand, was admired for his role as Big Brother’s house player, who was tasked to bring out the true colors of his fellow housemates. As the unofficial head of the former Team Wayuk, the “Hopeless Romantic of Gensan” was able to display his assertive personality and leadership skills in their tasks.

Like Paco, Slater is also a leader who has remained firm in his principles to avoid hurting his fellow housemates’ emotions. Although he grew up privileged, he has shown compassion and willingness to help the underprivileged housemates.

Tune in to the last two days of PBB Unlimited this week to know more about the Big Four housemates and wait for the announcement on how to vote for your Big Winner. Who among Biggel, Paco, Pamu, and Slater will join the roster of ordinary Pinoys who rose to prominence via ABS-CBN’s talent and reality programs?

Catch the grand celebration of Filipino pride and talent in PBB Unlimited: Big Night at the Grandstand featuring world-class performances from the grand winners and finalists of ABS-CBN’s shows such as Melai Cantiveros, XB Gensan, El Gamma Penumbra, Bugoy Cariño, and many more.

Hosts Toni Gonzaga, Bianca Gonzalez, and Robi Domingo will also announce at the Big Night the newest Kapamilya who will share their hosting duties in the PBB Teen Edition 4, which will kick off on Easter Sunday (April 8).